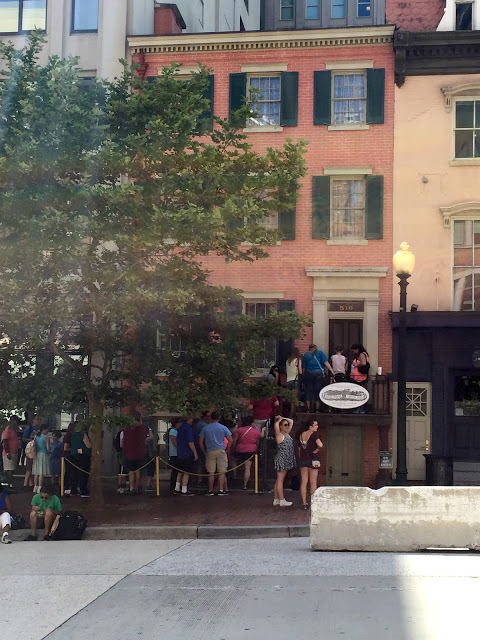 On the night of April 14, 1865, the mortally wounded President Abraham Lincoln was carried to a back bedroom of this building that was then a boarding house. 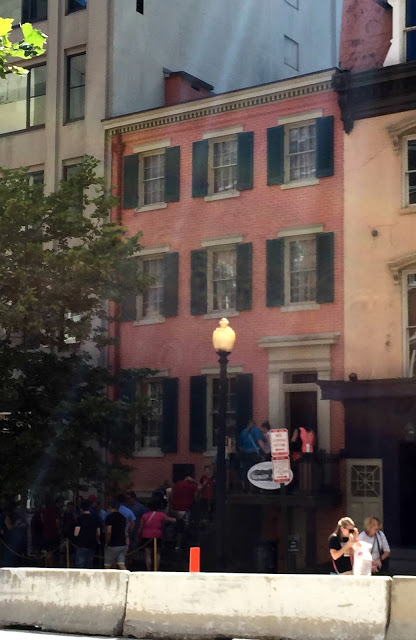 Though none of the furniture in the Petersen House is original, the three rooms on display are furnished in 1865 period pieces. 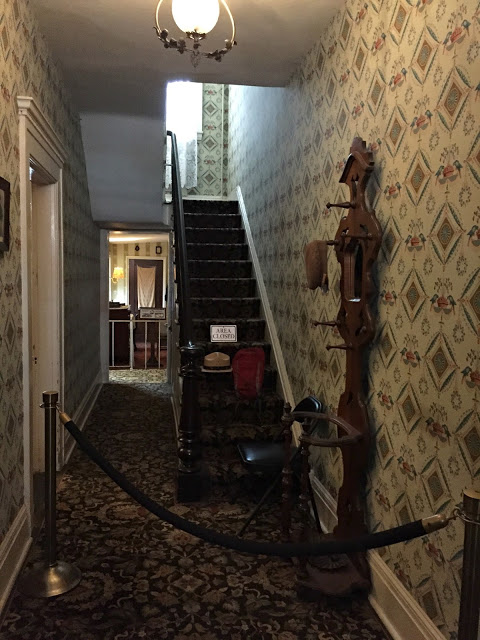 Foyer of the Petersen House
William Petersen, a German tailor, purchased the lot in 1849 and built a four-story house. He lived here with his family but rented extra rooms to lodgers. source 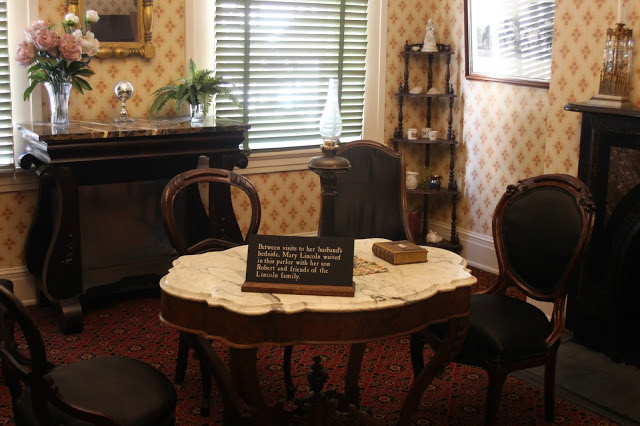 Doctors present at the shooting that took place across the street at Ford’s Theater, decided that President Lincoln could not die in a theatre, and knowing he could not survive the journey back to the White House, asked audience members to carry him outside, ultimately bringing him into the Petersen House. source

In the 1940’s and 50’s, the Department of the Interior decided to renovate the Petersen House to its appearance on the night of the assassination.  A historically accurate restoration was done using photographs and drawings from Lincoln’s last night. 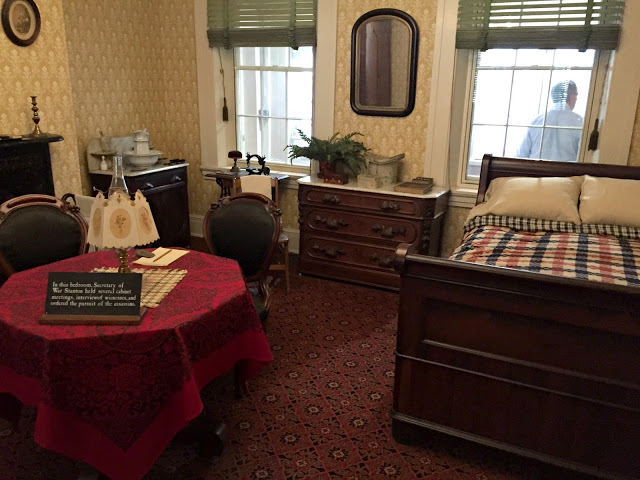 From this back parlor of the Petersen house, authorities interviewed witnesses and ordered the arrest of  John Wilkes Booth.source 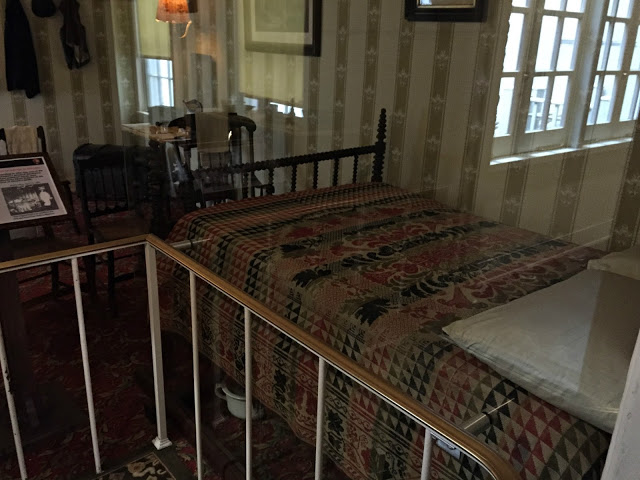 In this first-floor bedroom of the boarding house, they laid the president diagonally across the bed because his tall frame would not fit normally on the smaller bed source Physicians continually removed blood clots which formed over the wound and poured out the excess brain fluid and brain matter from where the bullet had entered Lincoln’s head in order to relieve pressure on the brain. However, the external and internal hemorrhaging continued throughout the night. source 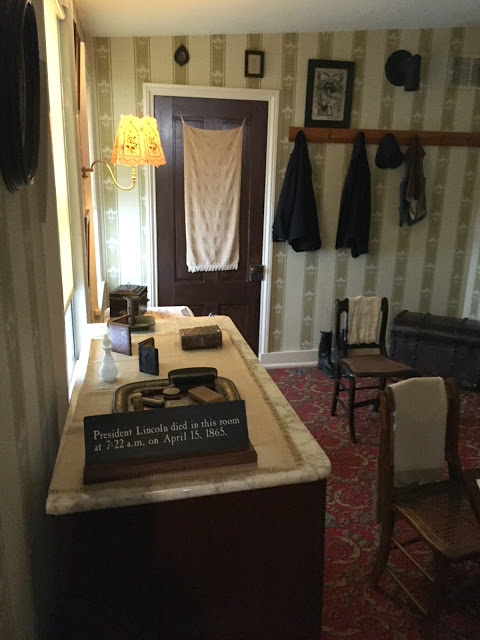 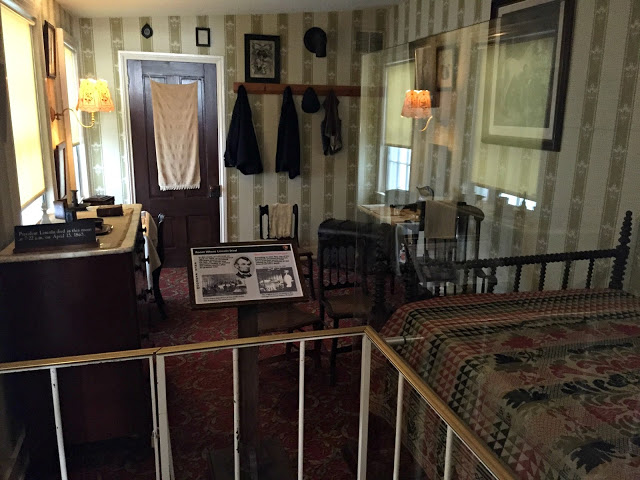 The Petersen House, has been restored to its 1865 appearance, but does not contain the original Lincoln deathbed. When William and Anna Petersen died in 1871, their furniture was sold at auction. William H. Boyd purchased some of the furnishings, paying $80 for the deathbed. His son inherited these items and sold them to Charles F. Gunther, a wealthy Chicago candy manufacturer and collector. After Gunther died in 1920, the Chicago History Museum bought his extraordinary collection, which included the Lincoln deathbed and related furnishings. source 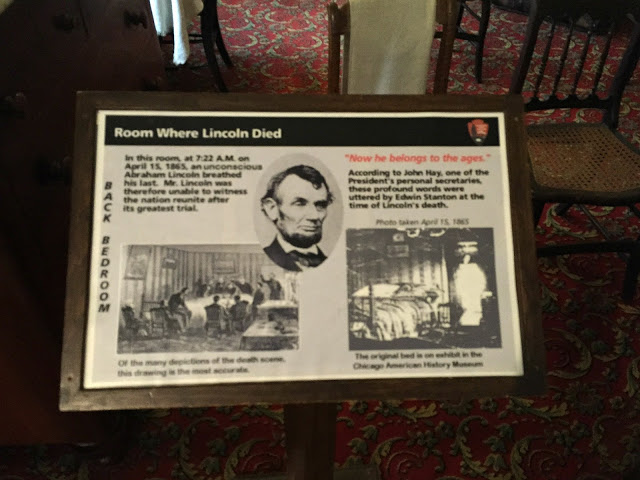 It was truly a moving experience to peer into the room that our 16th president breathed his last. 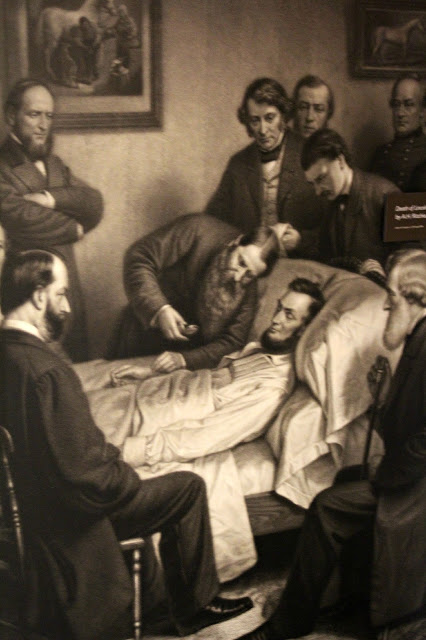 A portion of the engraving of President Lincoln’s death (1868) by Alexander Hay Richey, Library of Congress

In my research, I found this interesting:

Major Rathbone and Clara Harris, who were seated with the Lincolns inside the box, would never again fully recover emotionally from what happened. Mary Todd lived out her remaining years in seclusion and died July 16, 1882. Clara Harris and Major Rathbone married and had three children. In 1883, Major Rathbone shot his wife, leaving three young children to be raised by their mother’s sister. Rathbone was committed to an asylum for the insane near Hanover, Germany. He remained in the institution for the rest of his life until his death in 1911. Their son, Henry Riggs Rathbone entered politics and represented Illinois in the 68th Congress. He was instrumental in getting a bill passed which authorize the government to purchase and house the Olydroyd Collection of Lincoln memorabilia, including items associated with the assassination of President Lincoln. The new museum, built in the basement of Ford’s Theatre to accommodate the Olydroyd collection, opened February 12, 1932. source