This week at Tuesday with Dorie is a Rewind one meaning we could post something we already made or make something the group made that we missed.  Since I am the last baker to sign on I had a lot of choices.  All of the baking I have done I never made Rugelach and thought they looked and sounded good. 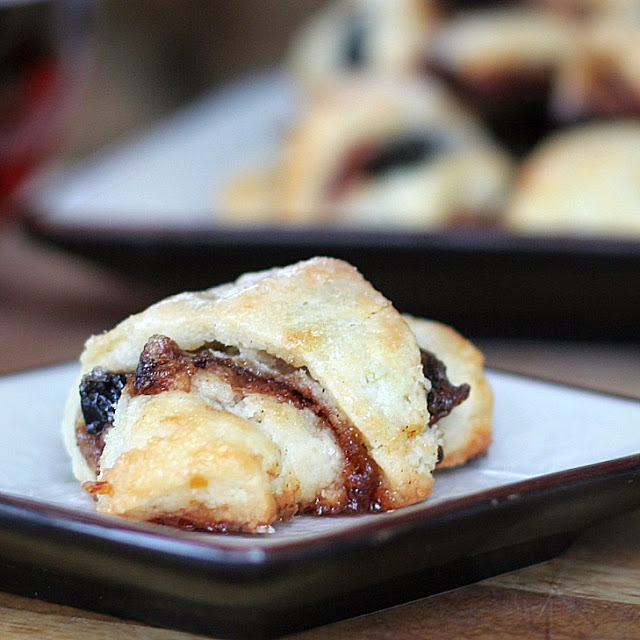 I do love these little pastry cookies.  They are not as sweet as I thought they would be even with a dried fruit filling, a spreading of jam and a sprinkling of cinnamon sugar.  I love the flaky pastry with the fruit and nuts inside.  I substituted chopped dates for the chocolate in the original recipe.
Rugelach
Baking From My Home to Yours
by Dorie Greenspan

For the filling
2/3 cup raspberry jam, apricot jam or marmalade (I used raspberry on half and apricot on the rest)
2 tablespoons sugar
1/2 teaspoon ground cinnamon
1/4 cup chopped nuts (pecans, walnuts or almonds)
1/4 cup plump, moist dried currants (I used cinnamon raisins that my sister gave me and I had never heard of before)
4 ounces bittersweet chocolate, finely chopped, or 2/3 cup store-bought mini chocolate chips (I did not use chocolate but substituted chopped dates)

For the dough
Let the cream cheese and butter rest on counter for 10 minutes ~ you want them to be slightly softened but still cool.

Put the flour and salt in a food processor, scatter over the chunks of cream cheese and butter and pulse the machine for 6 to 10 times. Then process, scraping down the sides of the bowl often, just until the dough forms large curds. Do not work the dough too long that it forms a ball on the blade.
Turn the dough out,gather it into a ball and divide it in half.  Shape each half into a disk, wrap the disks in plastic wrap and refrigerate for at least 2 hours, or up to 1 day. (Wrap airtight, the dough can be frozen for up to 2 months.)

To make the filling
Heat the jam in a saucepan over low heat, or microwave until it liquefies. Mix sugar and cinnamon together.
Line 2 baking sheets with parchment or silicone mats. (Silicone baking mats are great for rugelach.)

To shape the cookies
Pull one packet of dough from the refrigerator. If it is too firm to roll easily, leave it on the counter for about 10 minutes or give it a few bashes with your rolling pin.

On a lightly floured surface, roll the dough into an 11- to 12-inch circle. Spoon (or brush) a thin gloss of jam over the dough, and sprinkle over half of the cinnamon sugar.

Using a pizza wheel or a sharp knife, cut the dough into 16 wedges, or triangles. (The easiest way to do this is to cut into quarters, then cut each quarters into 4 pieces.)

Arrange the roll-ups on one baking sheet, making sure the points are tucked under the cookies, and refrigerate for at least 30 minutes. (The cookies can be refrigerate overnight or frozen for up to 2 months; don’t defrost before baking, just add a couple of minutes to the baking time.)

Getting ready to bake
Position the racks to divide the oven into thirds and preheat the oven to 350 degree F.

To glaze
Stir the egg and water together. Brush a bit of the glaze over each rugelach. Sprinkle the cookies with sugar.
Bake the cookies for 20 to 25 minutes, rotating the sheets from top to bottom and front to back at the midway point, until they are puffed and golden.
Transfer the cookies to racks to cool to just warm or to room temperature. 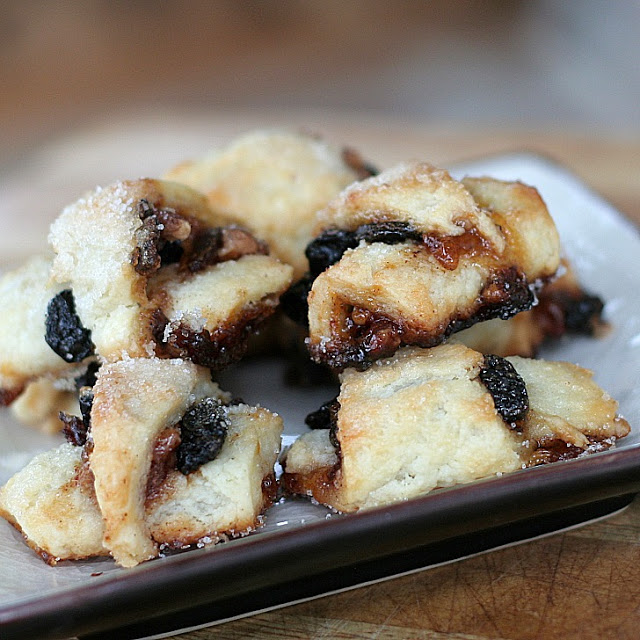