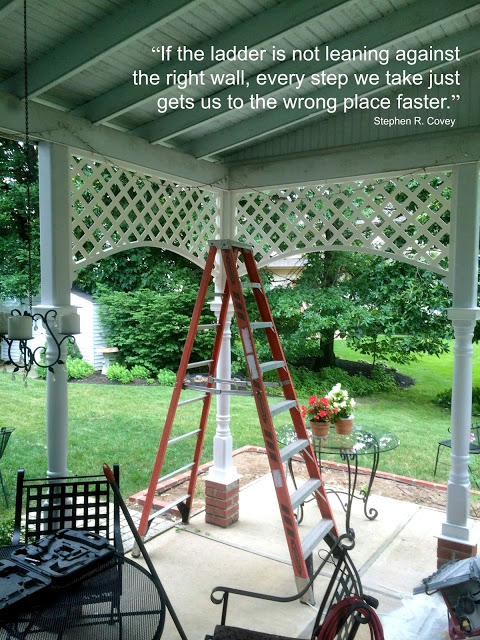 I like this quote. I think there is some wisdom in these words. What I do not like is heights.
But when I got an estimate for a painting job that was higher (ha, that could be a pun) than I was willing to pay, I looked for alternatives. 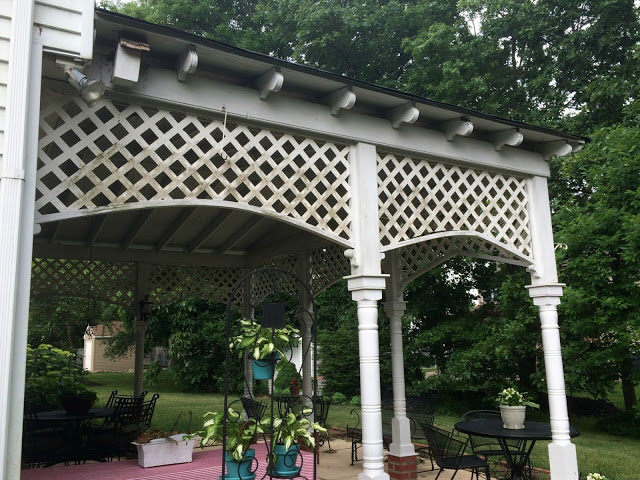 Even with annual repair, patching and painting, our patio was showing its age and the toll twenty years had taken. It was time for an overhaul.
John and I designed the patio and even set to work building it.  We laid the foundation and poured the concrete flooring. Then we realized this projects was a bit bigger than our DIY skills so we had a friend in construction that saw our dream and with his expert abilities, completed the project. 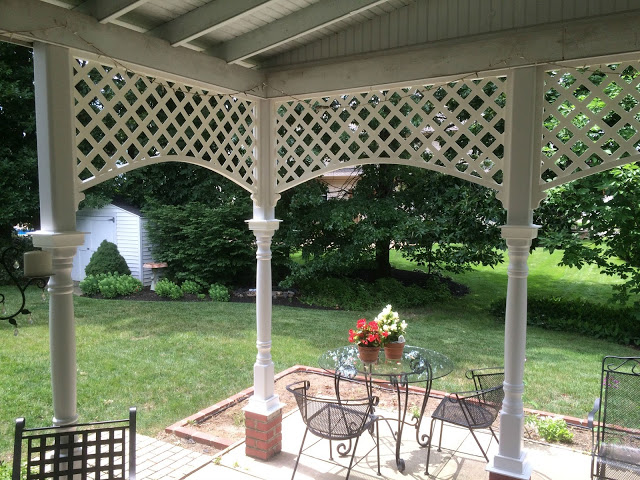 Twenty years of hot, hot summers and freezing cold winters left the patio in disrepair. We were so happy the original builder was able to to come again and do the job. All of the wood columns were replaced with vinyl as well as new lattice. 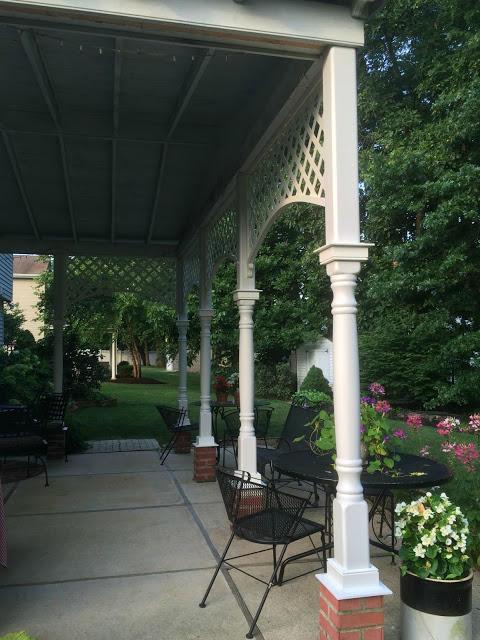 Some of the wood trim at the top needed replacing too. The roof was replaced when we did the whole house a few years ago. 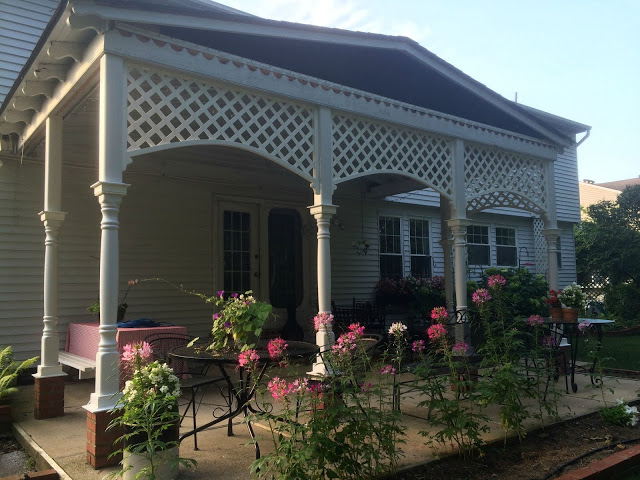 We have some freebie cleome that somehow seeded in this area that added color as this project continued all summer.
You may remember the hard work it took John and Jared to remove the hedge of boxwood that surrounded the patio. 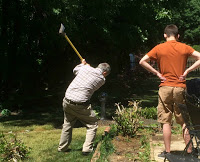 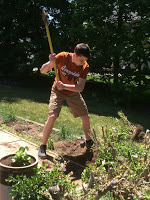 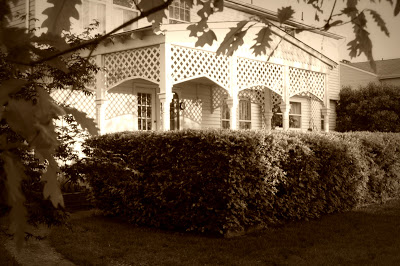 (2010 photo of boxwood hedge)
We loved the hedge and the privacy it provided but they succumbed to boxwood miner and had grown taller than we wanted.
With all of the repairs complete, it was time to paint. I have painted this patio several times in the past using makeshift scaffolding but I am not doing that again. Then I thought of renting scaffolding with a platform thinking I would feel secure if I could hold on to a railing.
What I did not realize is that when the scaffolding is in the highest position, there is nothing to hold on to. My dear husband bought some wood and built a simple railing around three sides giving me a secure place to hold on to. 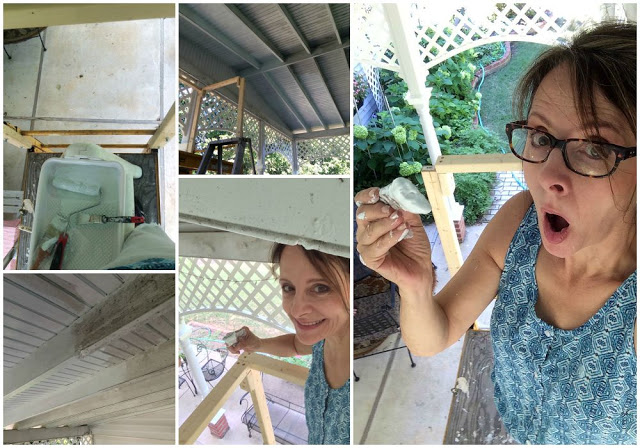 I still felt really shaky getting up and down and never let go of the railing, but I managed to proceed.
And, yes I did get the paint off my glasses but think I will have strands of sky blue in my hair for a very long time! 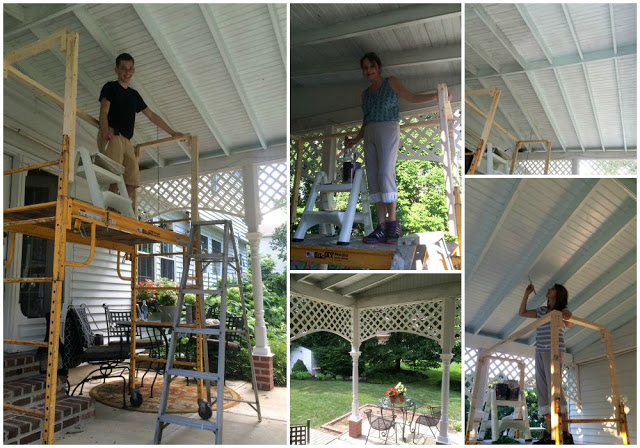 Four days and three coats of paint got rather tiring. Jared came to my rescue and we worked together one day until a bee became a nuisance and ended his painting career. After he and Raiders encounter with bees several years ago, Jared is understandably, a bit wary. 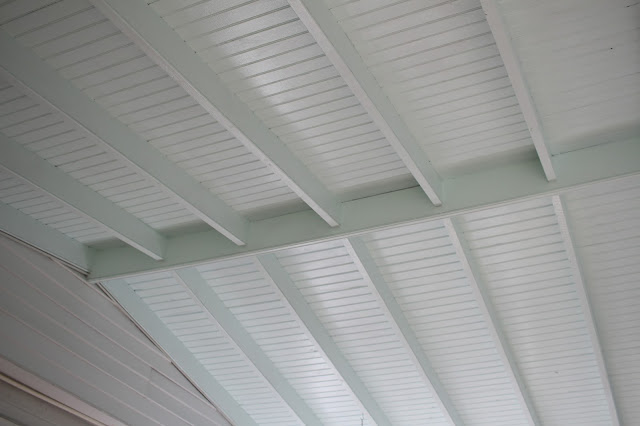 Now the ceiling is all finished. Doesn’t it look bright and clean! 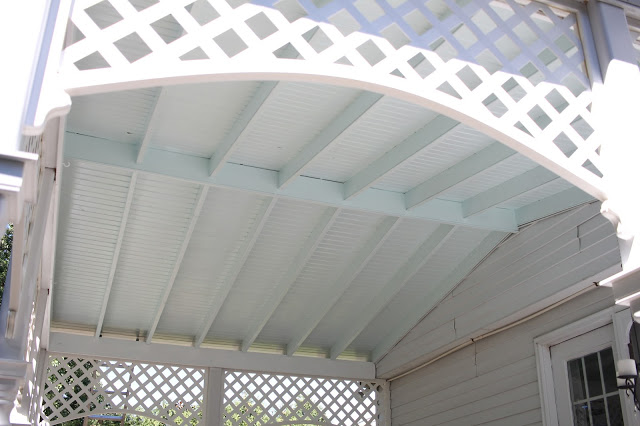 All the areas on the underside are complete. We purchased a ceiling fan and hope to have electric line run and installation in the near future. 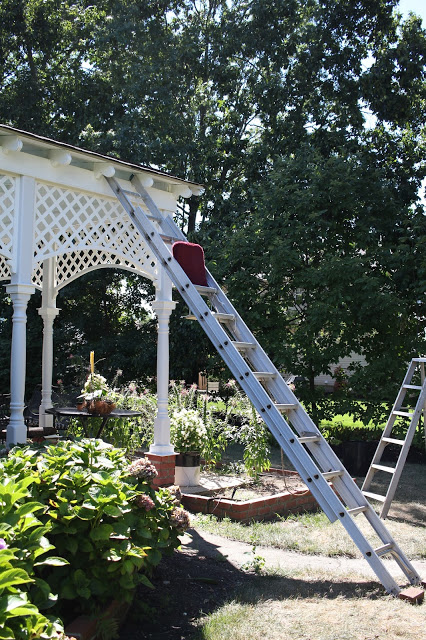 The scaffolding is gone and we just have the outside edge to paint and some chipped bricks to repair.
Now, I have to decide what to plant where the boxwood were growing.
Low-growing bushes to form a hedge like we had?
Perennials?
Annuals?
The area receives just a little late afternoon sun and our zone is 6B.
What do you think?