I take lots of photos.  I keep the best and organize them into various file folders for easy retrieval should I want to find something in the future.  The others I delete.  Usually I keep up, but inevitably fall behind in this task each fall when I get extra busy with projects.
That’s what I have been working on these crazy weather days.  After the new year we had an eight-inch snowstorm.  A few days ago there were -30 wind-chills. Then is warmed up and all the snow melted. This morning is was freezing, icy rain that caused accidents everywhere and even a salt truck overturning.  Tomorrow it is going up to 60 degrees F.
Like the random weather, I am sharing unrelated photos and throwing in a recipe that I spontaneously made when I saw the recipe posted on facebook. 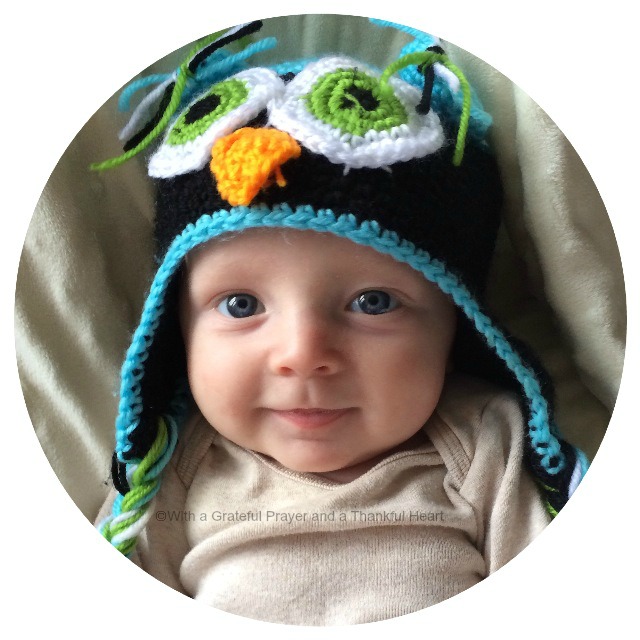 This adorable photo is of our youngest grandchild, Jethro.  His mama took the picture and I couldn’t resist sharing.  I didn’t make the hat – it was in a hand-me-down container of clothes he received. 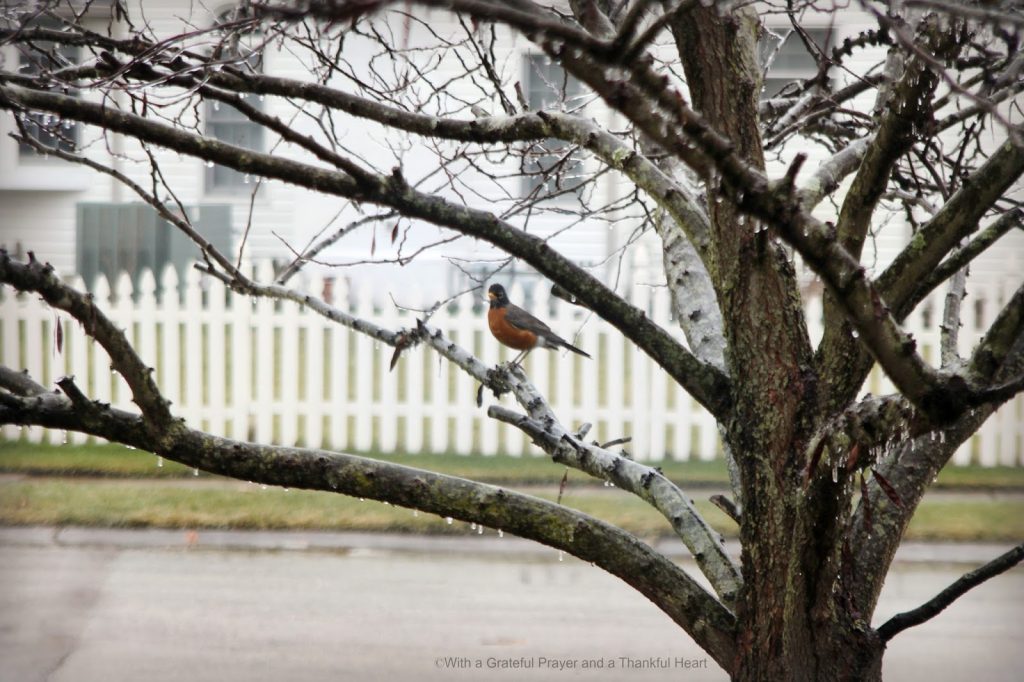 So I didn’t expect to see this robin land on a branch as icy raindrops fell. 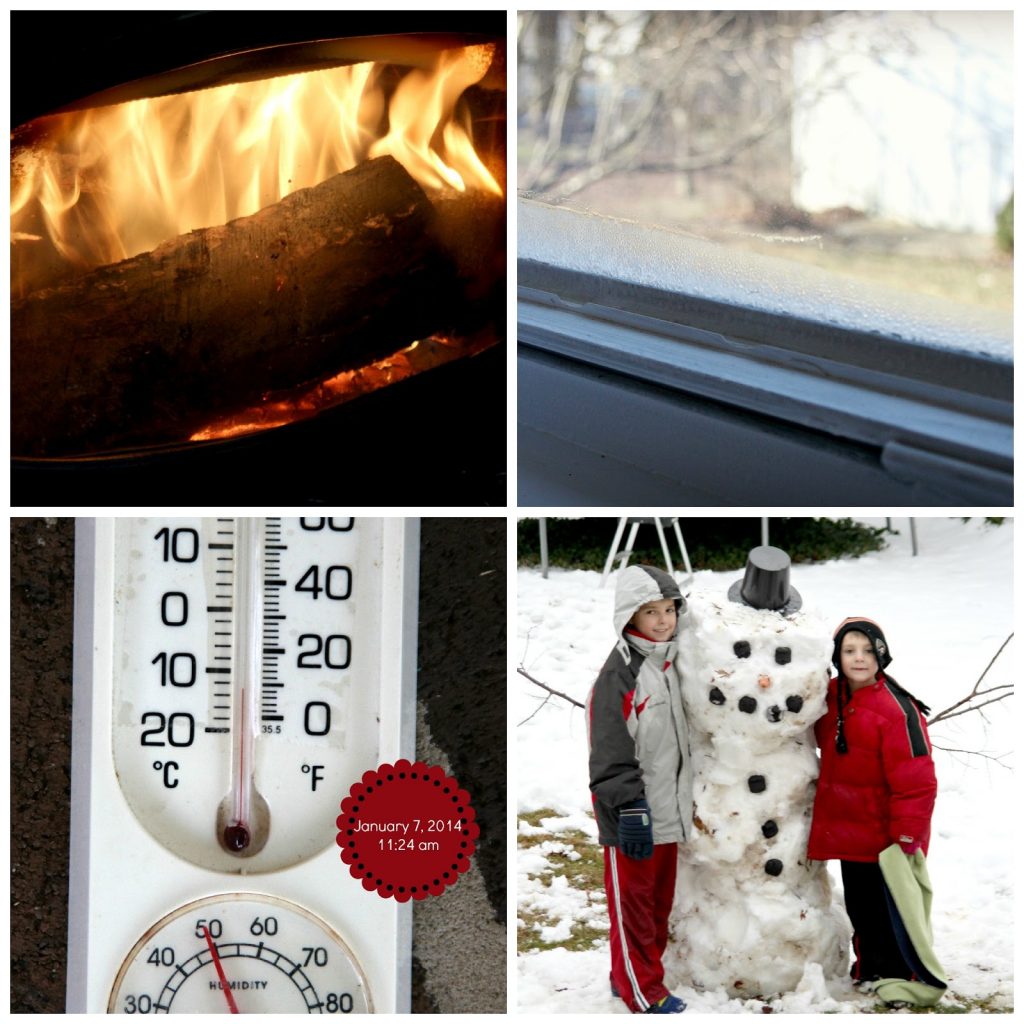 Almost through a cord of wood already as we stay warm in frigid temperatures.  For the first time I had frost on the inside of my windows.  Noah and Silas bundled up and braved the chill long enough to build a dapper snowman 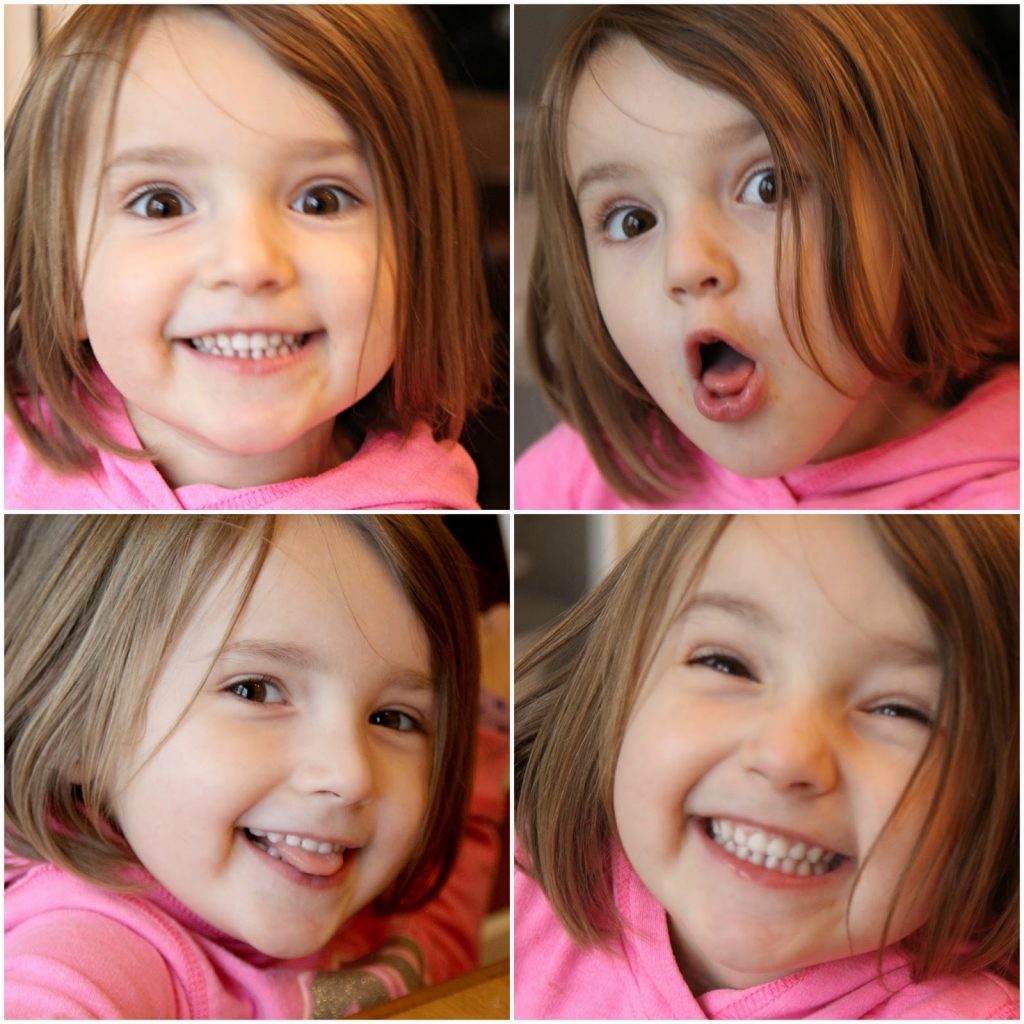 Cambrie asked if she could make her favorite Silly faces as I snapped photos. 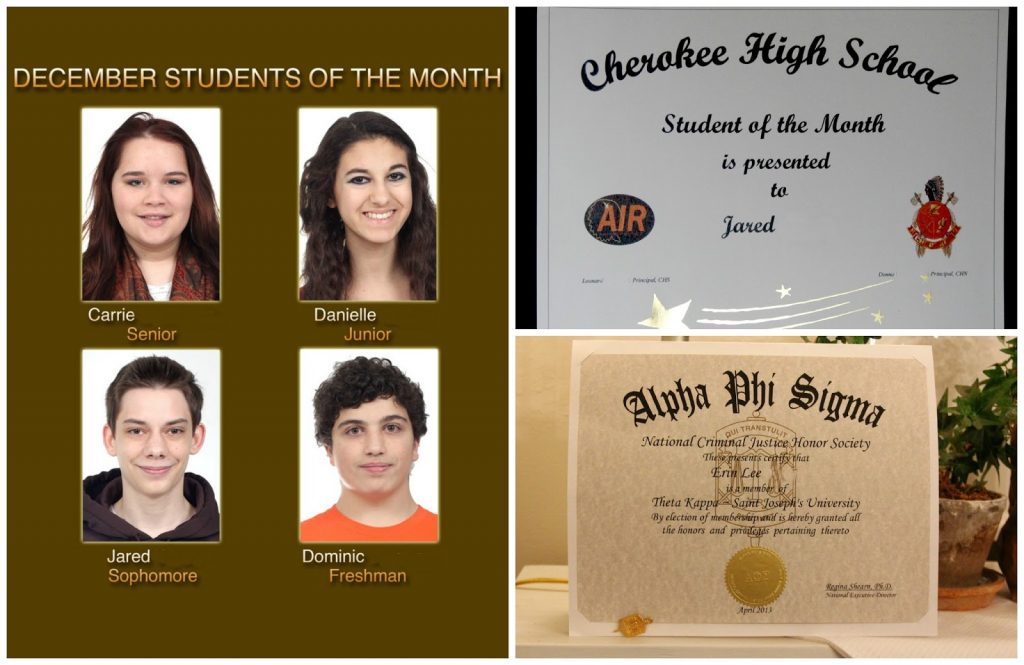 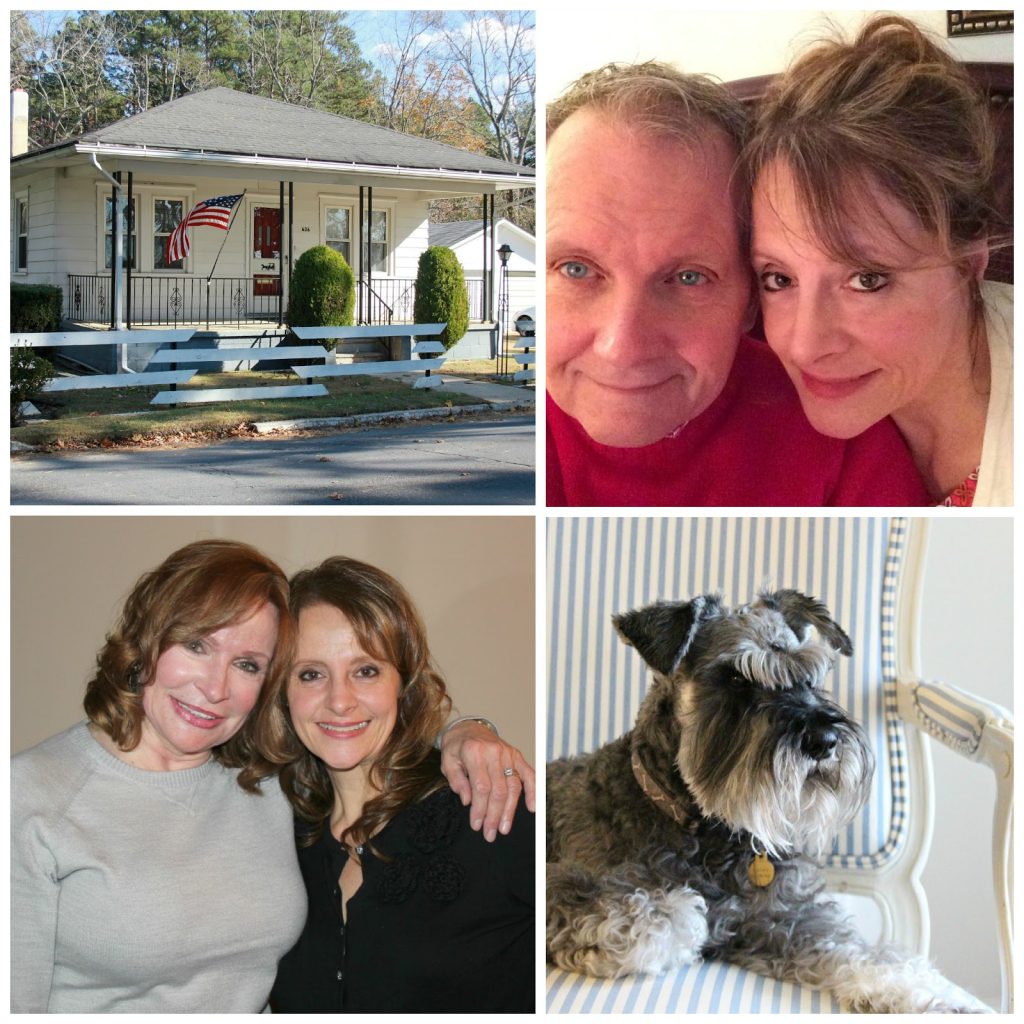 We worked very hard liquidating Aunt Marie’s sweet little Sears Kit house bungalow and readied to sell.
A fun selfie pic of John and I enjoying a stay-at-home date-night of wine and pizza while we watched the old movie classic, Roman Holiday
My sister and I at her daughters birthday party
My favorite pup 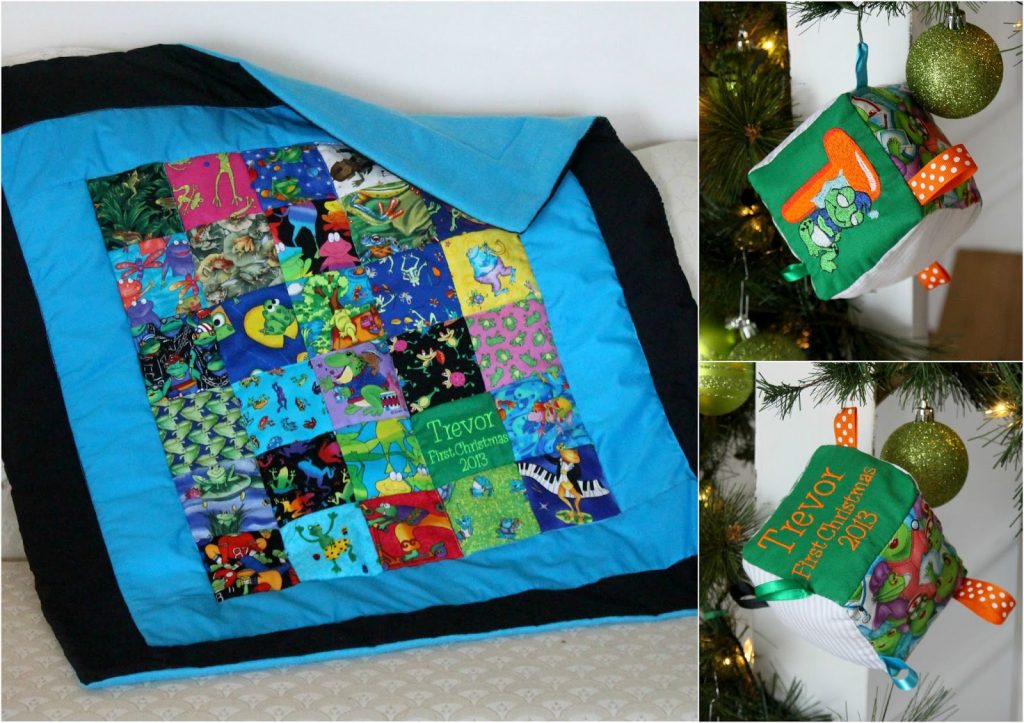 I couldn’t share this patchwork quilt prior to Christmas because it was a surprise for our daughter, Jill who is providing foster care for a dear baby boy.  With the extra fabric I made the soft cube toy for him as well. 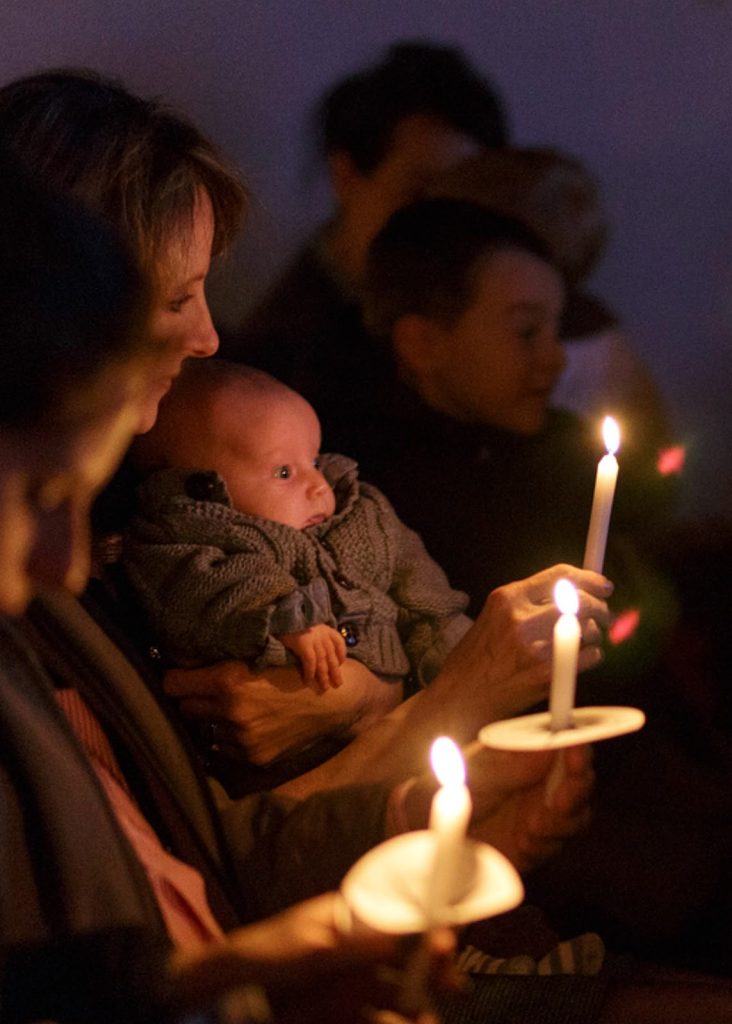 I didn’t know this photo was taken until I saw it on our churches website.  Baby Jethro in the glow of candlelight as we sang Silent Night on Christmas Eve. Abbey is in the foreground with Caleb, Chloe and Jamie in the background. 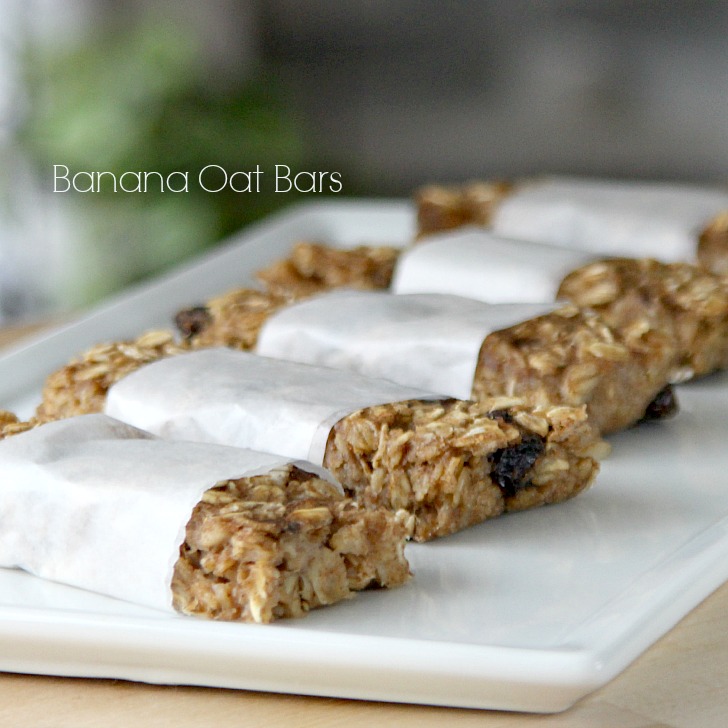 And finally, no sooner did I see a recipe on my facebook feed, I went straightway to the kitchen and gave this Banana Oat Bar a try.  It caught my attention because it was suggested as an alternative to wrongful cravings (which I was having).  The original recipe contains no sugar, butter or eggs and since I had ripe bananas on the counter, I whipped it together and popped it into the toaster oven in little time. 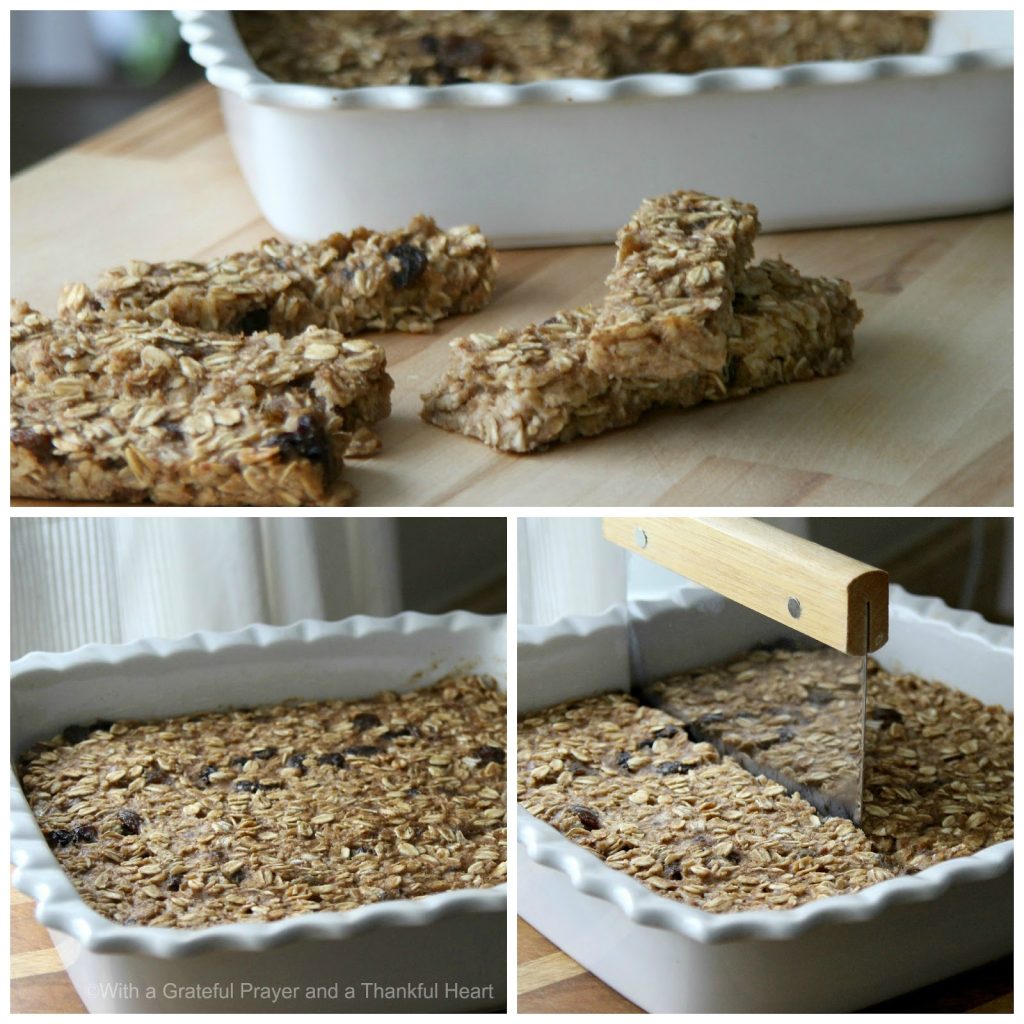 The recipe wasn’t detailed so I wasn’t sure if it would bake up like a bar or be more like baked oatmeal.  I sprayed the dish prior to spreading the mixture and was happy that it came out easily and cut neatly.
I can’t say that my sweet tooth didn’t think of spreading the bars with peanut butter and (heaven forbid) pipe some melted chocolate on top but I subdued that impulse and found them to taste, well, healthy.  They had a pleasant banana flavor, hint of sweetness from the raisins and a soft, chewy texture.  I got 12 4-inch x 1-inch bars and with my substitutions, I figured each to be about 70 calories.  A good, healthy alternative to curb a snack attack. If calories aren’t a concern, stirring in some mini chocolate chips and/or nuts would be a nice addition.
Banana Oat Bars
PRINT RECIPE
3 ripe bananas, mashed (I used 1 cup)
1/3 cup unsweetened applesauce (I used 1/2 cup since I didn’t have 3 bananas)
2 cups oats
1/4 cup almond milk (I used 2% milk)
1/2 cup raisins
1 tsp vanilla
1 tsp cinnamon
optional (I added 1 Tbs Splenda)
Preheat oven to 350 degrees
lightly spray an 8-inch square dish
In mixing bowl, Stir together all of the ingredients until well combined.  Pour into prepared dish and spread evenly.  Bake about 20 minutes.  Remove from oven and allow to cool.  Cut into bars.
Yield: 12 1-inch x 4-inch bars