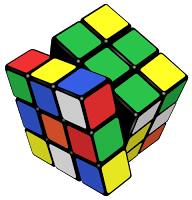 When our oldest grandson, Jared was just 9 years old he received his first Rubik’s Cube. His Uncle Brad told him about algorithms and gave pointers on how to solve this challenging puzzle. He spent two weeks doing little else but practicing the steps required to solve the puzzle quicker than his uncles. It has been a few years but he can still complete the puzzle
in less than 2 minutes.

He is happy to share his skill with you:

The Rubik’s Cube is a 3-D mechanical puzzle invented in 1974 by Hungarian sculptor and professor of architectural Erno Rubik. Originally called the “Magic Cube”, the puzzle was licensed by Rubik to be sold by Ideal Toys in 1980 and won the German Game of the Year special award for Best Puzzle that year. As of January 2009, 350 million cubes have sold worldwide making it the world’s top-selling puzzle game. It is widely considered to be the world’s best-selling toyFor more Show &