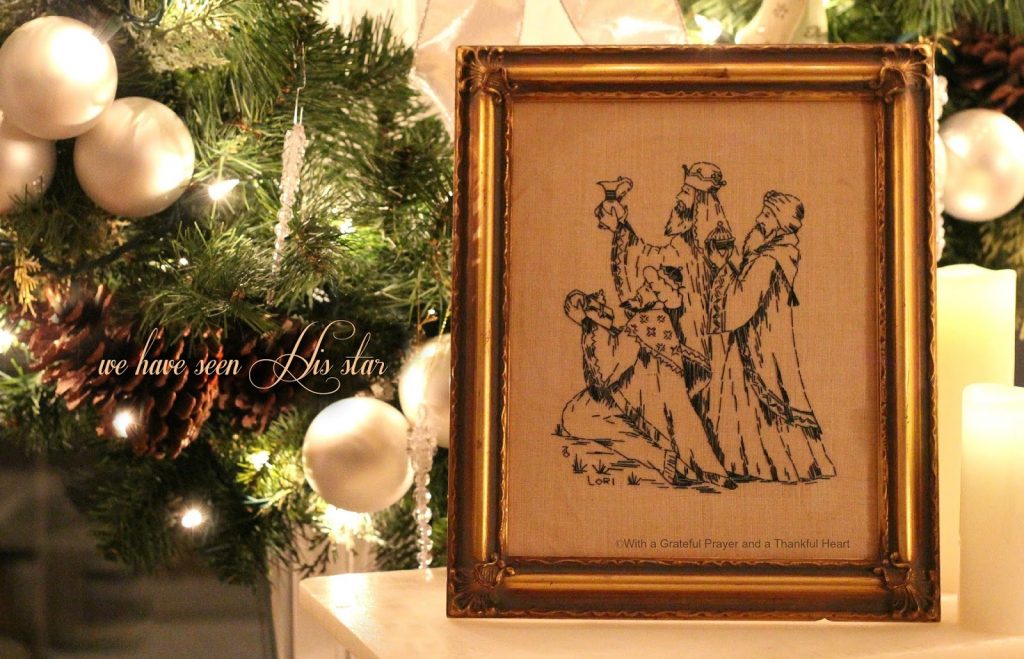 When going through John’s Aunt Marie’s home after her passing, I found this embroidery. I had made for her for Christmas when we were early married and she kept if all of these years. I had long forgotten about it and was so pleased to see it again. It was a 1976 Paragon kit called The Three Kings, etchings in filo on linen.
(The term filo is the Italian word for floss or thread, similar to the Spanish hilo)
Does anyone recognize it from years ago?

Ever wonder who these wise men were, where they came from and if there were really three of them? Over time, many beliefs with little to no Biblical basis have crept into common Christian thinking.

Some Misconceptions about the Wise Men written by Tim Chaffey gives insight to these historical characters.

The book of Matthew contains the account of the wise men:

Now after Jesus was born in Bethlehem of Judea in the days of Herod the king, behold, wise men from the East came to Jerusalem, saying “Where is He who has been born King of the Jews? For we have seen His star in the East and have come to worship Him.” (Matthew 2:1–2) The original meaning of mάgoi is likely in view here—wise men who interpreted special signs. There are at least three reasons for this identification. First, they acknowledged that they were interested in signs in the heavens. Second, the Bible states that they were from “the East,” which would be in the direction of Babylon and ancient Persia. Third, of all the peoples of “the East,” the Babylonians had many opportunities to learn of the Jewish Scriptures, which contain multiple promises of the coming Messiah. Daniel was an influential government official in Babylon about 600 years earlier, and he foretold the coming of the Messiah (Daniel 9:24–26). Also, tens of thousands of Jews lived in Babylon during the time of the Exile (605–536 BC), and they maintained a large presence there for the following centuries. (source)
Curious how they learned of Jesus, when and where they saw him, click Answers in genesis

“We Three Kings”, also known as “We Three Kings of Orient Are” or “The Quest of the Magi”, is a Christmas carol that was written by John Henry Hopkins, Jr., in 1857. At the time of composing the carol, Hopkins served as the rector of Christ Episcopal Church in Williamsport, Pennsylvania, and he wrote the carol for a Christmas pageant in New York City. It remains one of the most popular and most frequently sung Christmas carols today (Wikipedia)

We Three Kings
John Henry Hopkins, Jr., 1857
We three kings of Orient are;
Bearing gifts we traverse afar,
Field and fountain, moor and mountain,
Following yonder star.
Refrain
O star of wonder, star of night,
Star with royal beauty bright,
Westward leading, still proceeding,
Guide us to thy perfect light.
Born a King on Bethlehem’s plain
Gold I bring to crown Him again,
King forever, ceasing never,
Over us all to reign.
Refrain
Frankincense to offer have I;
Incense owns a Deity nigh;
Prayer and praising, voices raising,
Worshipping God on high.
Refrain
Myrrh is mine, its bitter perfume
Breathes a life of gathering gloom;
Sorrowing, sighing, bleeding, dying,
Sealed in the stone cold tomb.
Refrain
Glorious now behold Him arise;
King and God and sacrifice;
Alleluia, Alleluia,
Peals through the earth and skies.