We have been on our knees a lot lately.
Not all for praying although there have been a few prayers for aches, pains and sore muscles. 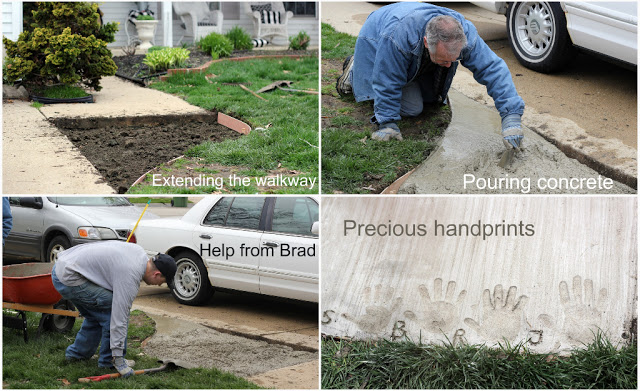 Because of the below average rain last summer, we lost some large patches of grass throughout the yard.

We decided to replace a couple of areas with a berm flower bed and one with a raised bed that I will relocate my herbs to along with a few blackberry and raspberry bushes.
While our son-n-law, Brad was visiting in mid-April, he helped pour concrete to extend the walkway and also  the grueling work of digging out the dirt and grass forming the new berm. 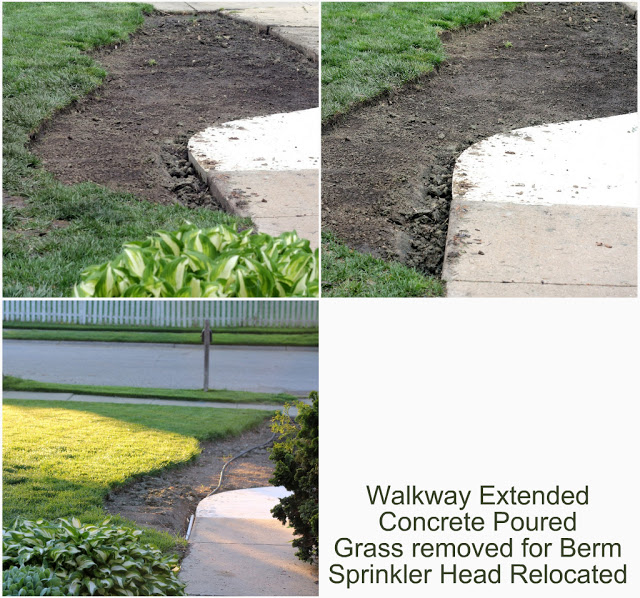 As in Murphy’s Law the project has had some delays and setbacks.
A sprinkler head had to be relocated.
The pipes we bought were the wrong size.
And the head broke and had to be replaced.

Another trench had to be dug to relocate the sprinkler head in the area the new raised bed is going.
Digging through heavy, hard Marl made it a big job.

My daughter, Erin just had their front yard sodded and asked if we wanted the scrap pieces left over.
Of course we did, so I drove to her house and completely filled our large trunk with sod.
I made the 30 minute drive home with my rear nearly dragging the road.
We dug out more bare spots to prepare the soil for the sod pieces.
It is a crazy patchwork of many small pieces but we have watered lots and hope it will eventually all grow together forming a nice new, bald-free, lawn.
We still have to put in the plastic edging along the berm edge then order and fill with top soil,
I plan on dividing plants I already have to fill up the berm.
I thought we would be further along in the process and would be able to divide my plants before they flowered and got too big.  Sometimes things take longer than expected!