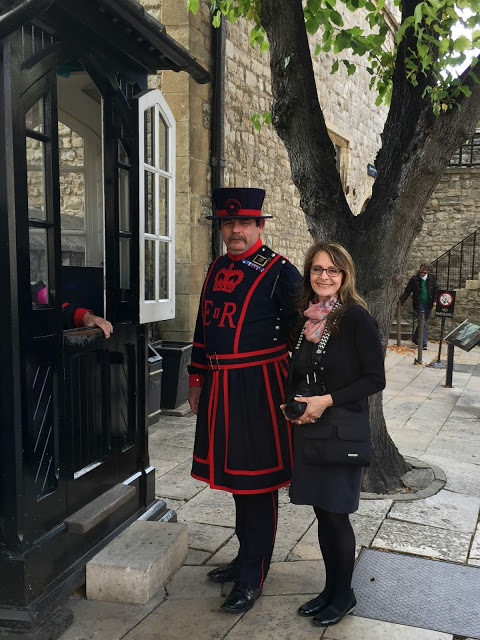 Beefeater, also called ceremonial guardians of the Tower of London

We have been doing a great job learning and getting around using the transit system in London, but this day it got confusing and we walked further than we needed. For the first time (the only time, really, during the entire trip) our feet and hips were sore and we felt tired. But it was all worth it to  visit Tower of London, Courtauld Gallery and Westminster Abbey!
But, as in these wise words, we resolved to 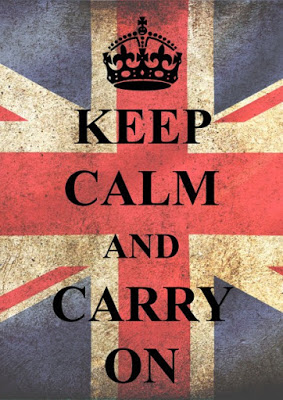 Beefeater at the Tower of London

The Yeomen Warders of Her Majesty’s Royal Palace and Fortress the Tower of London, and Members of the Sovereign’s Body Guard of the Yeoman Guard Extraordinary, popularly known as the Beefeaters, are ceremonial guardians of the Tower of London. In principle they are responsible for looking after any prisoners in the Tower and safeguarding the British crown jewels, but in practice they act as tour guides and are a tourist attraction in their own right, a point the Yeomen Warders acknowledge.


In 2011, there were 37 Yeomen Warders and one Chief Warder. All warders are retired from the Armed Forces of Commonwealth realms and must be former senior non-commissioned officers or petty officers with at least 22 years of service. They must also hold the Long Service and Good Conduct medal. source 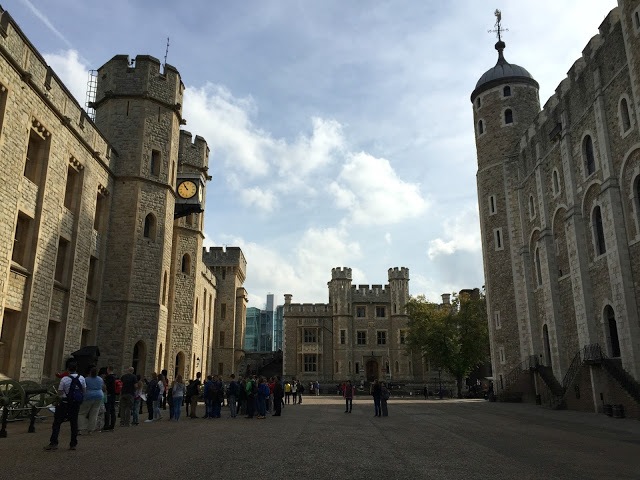 We took the circle line to The Tower of London
Her Majesty’s Royal Palace and Fortress, known as the Tower of London, is a historic castle located on the north bank of the River Thames in central London. It was founded towards the end of 1066 as part of the Norman Conquest of England.
The White Tower, which gives the entire castle its name, was built by William the Conqueror in 1078, and was a resented symbol of oppression, inflicted upon London by the new ruling elite.
The castle was used as a prison from 1100 until 1952), although that was not its primary purpose. A grand palace early in its history, it served as a royal residence.
As a whole, the Tower is a complex of several buildings set within two concentric rings of defensive walls and a moat. There were several phases of expansion, mainly under Kings Richard the Lionheart, Henry III, and Edward I in the 12th and 13th centuries. 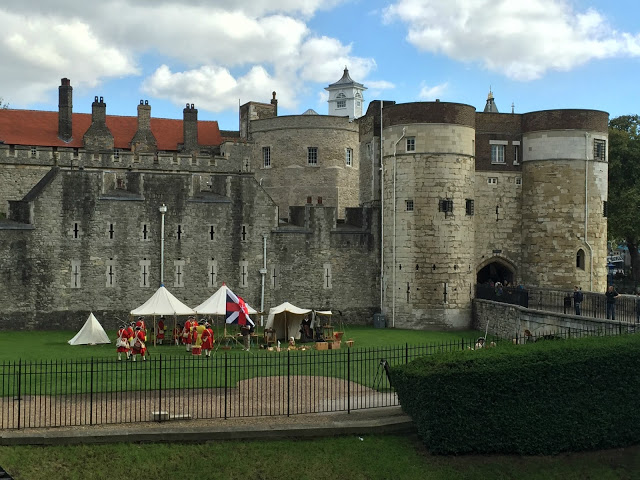 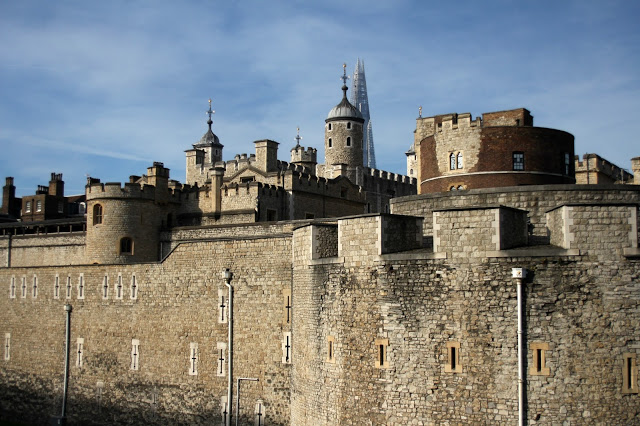 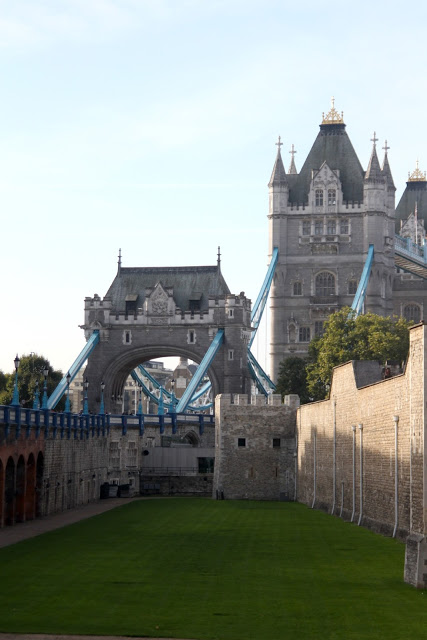 The moat around the tower 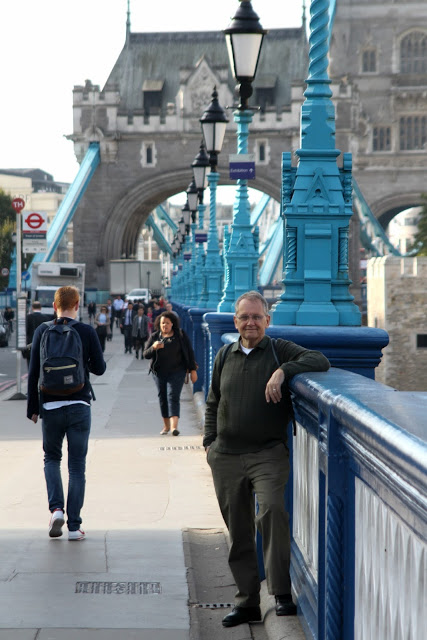 After our time at the Tower of London, we walked to the Tower Bridge. 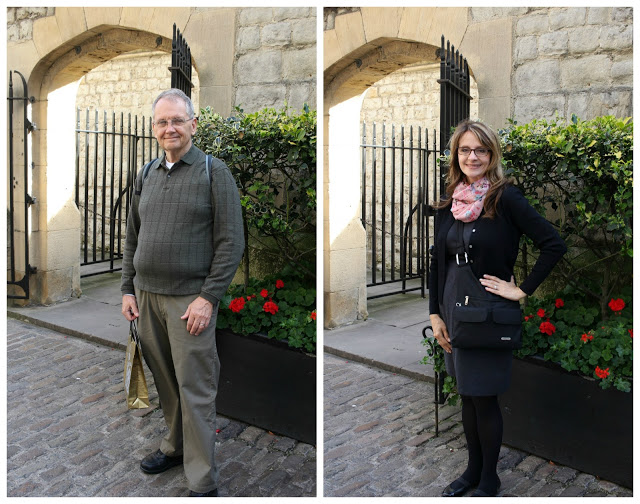 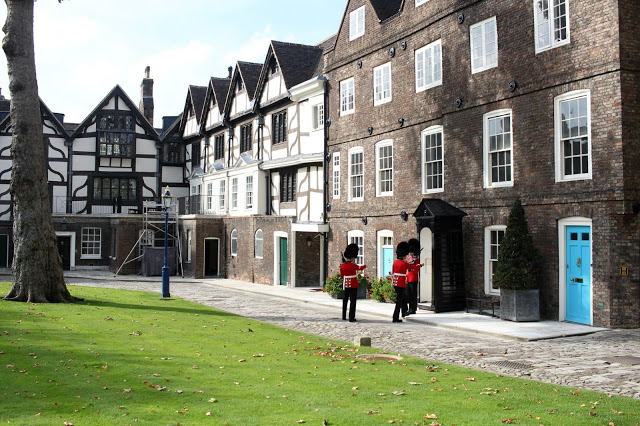 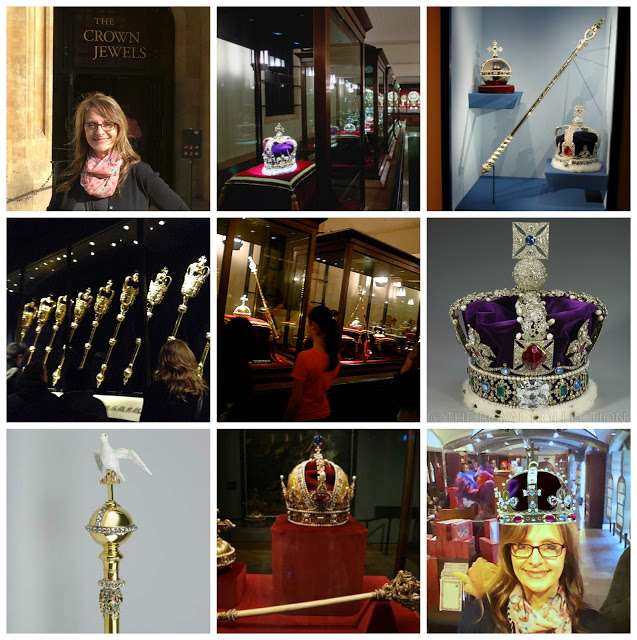 The Crown Jewels at the Tower of London are a unique working collection of royal regalia and are still regularly used by The Queen in important national ceremonies, such as the State Opening of Parliament.

Photos are not allowed  but I was able to gather some via the internet.  Truly dazzling!
The closest I came to a Royal Crown was in a gift shop that featured a wall camera. If I stood in just the right spot with my head in the right positions, I had a crown upon my head. 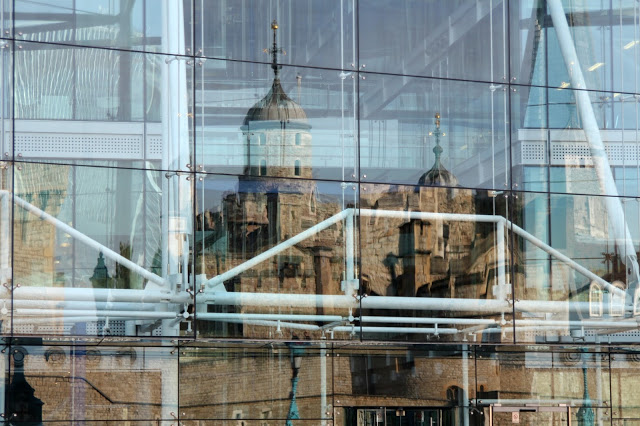 The Tower of London reflected in the glass of a modern building.

Another old with the new shot with the Shard standing in the background. 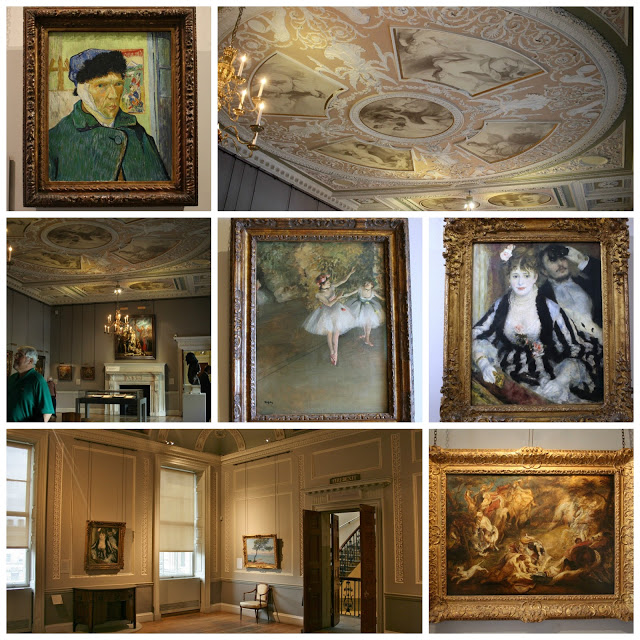 From the Courtauld Gallery we took the underground to Westminster Abbey where we followed a self-guided audio tour. This Gothic style Abbey church was founded in the 10th century and rebuilt in 1517.  It is a traditional place of coronations and burial site of British monarchs 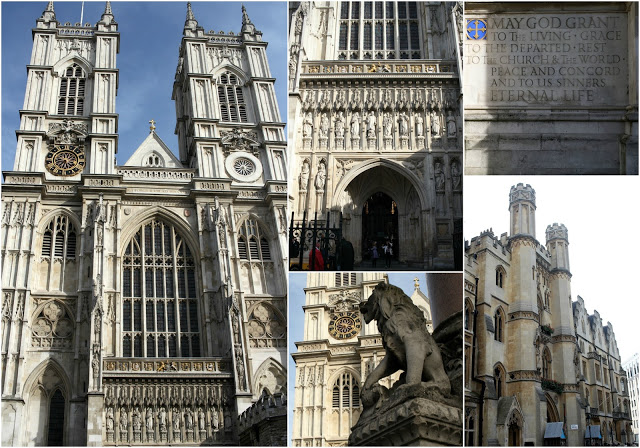 Westminster Abbey is steeped in more than a thousand years of history. Benedictine monks first came to this site in the middle of the tenth century, establishing a tradition of daily worship which continues to this day.


The Abbey has been the coronation church since 1066 and is the final resting place of seventeen monarchs. The present church, begun by Henry III in 1245, is one of the most important Gothic buildings in the country, with the medieval shrine of an Anglo-Saxon saint still at its heart.


A treasure house of paintings, stained glass, pavements, textiles and other artefacts, Westminster Abbey is also the place where some of the most significant people in the nation’s history are buried or commemorated. Taken as a whole the tombs and memorials comprise the most significant single collection of monumental sculpture anywhere in the United Kingdom. source 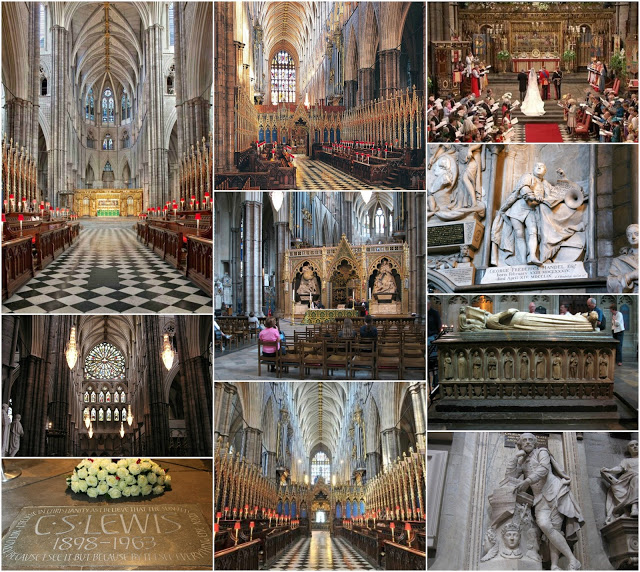 The present building dates mainly from the reign of King Henry III. In 1245 he pulled down the eastern part of the 11th century Abbey, which had been founded by King Edward the Confessor and dedicated in 1065. Earlier in Henry’s reign, on 16 May 1220, he had laid the foundation stone for a new Lady Chapel at the east end of the Confessor’s church, but as the Abbey’s own financial resources were not sufficient to continue the rebuilding of the whole church at this time no other work was carried out. source 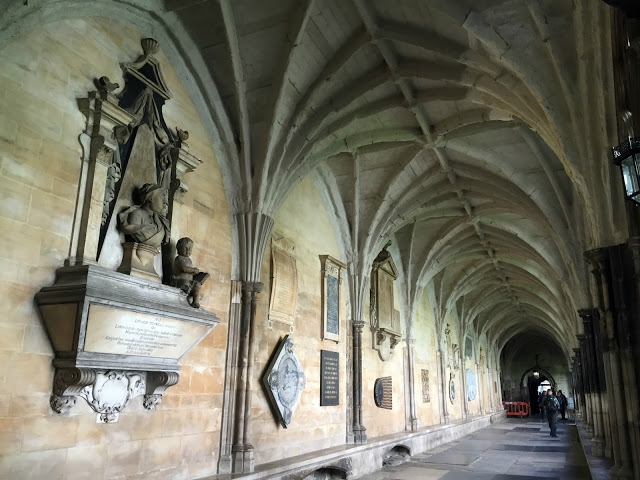 Walking the corridor of the Westminster cloister. 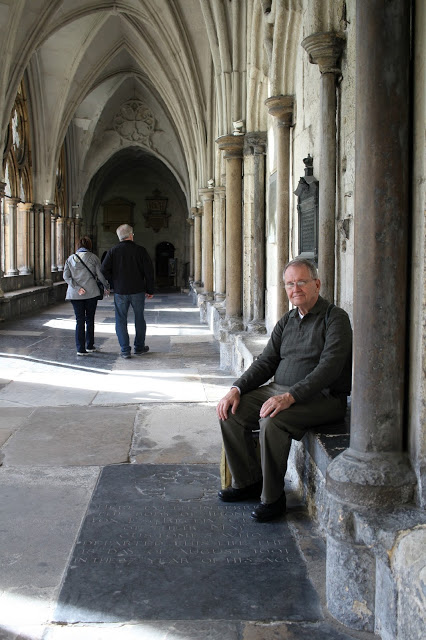 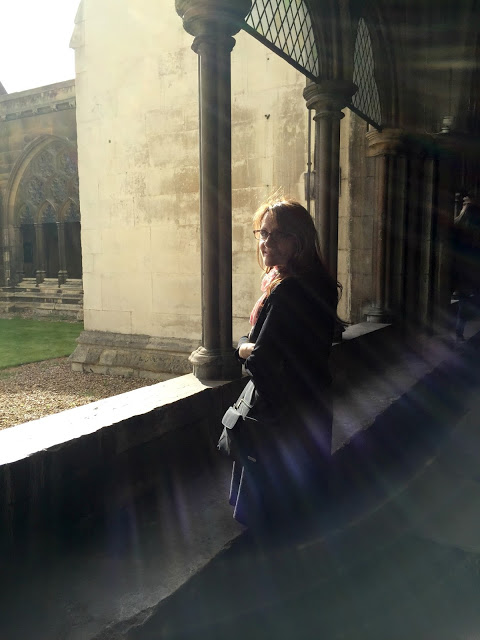 Sunbeams shining into the cloister. 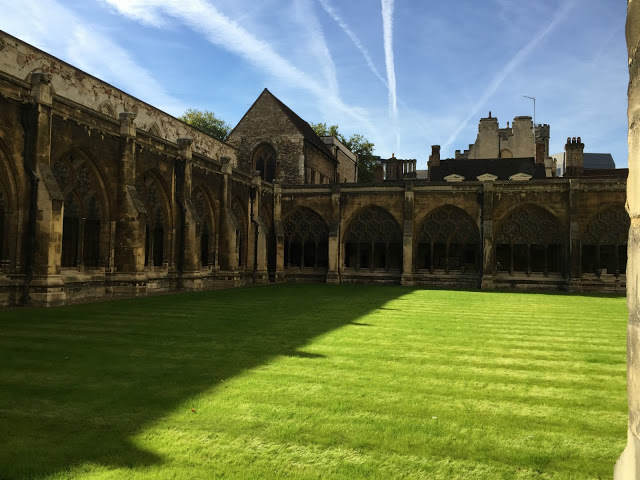 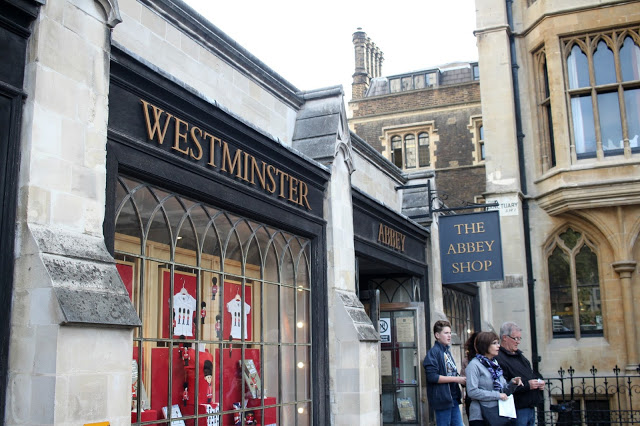 A stop at The Abbey Shop. 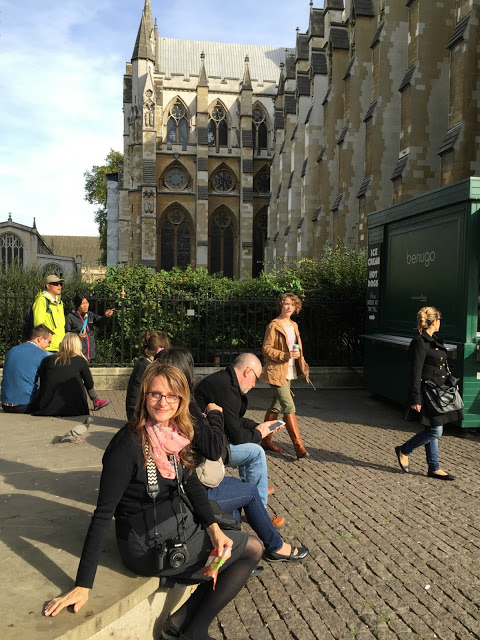 Enjoying a rest in the afternoon sunshine just outside the Abbey 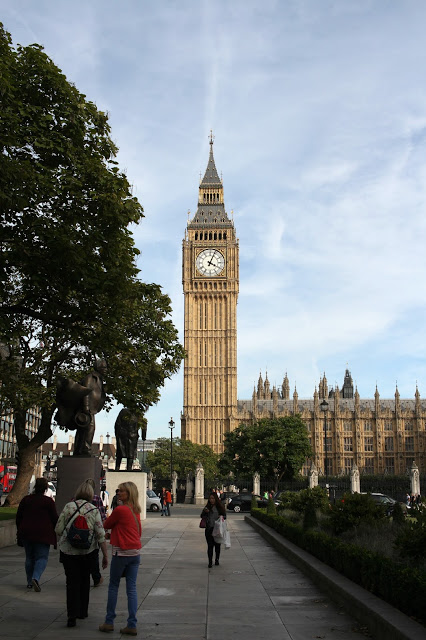 Walking toward the Parliament Building. 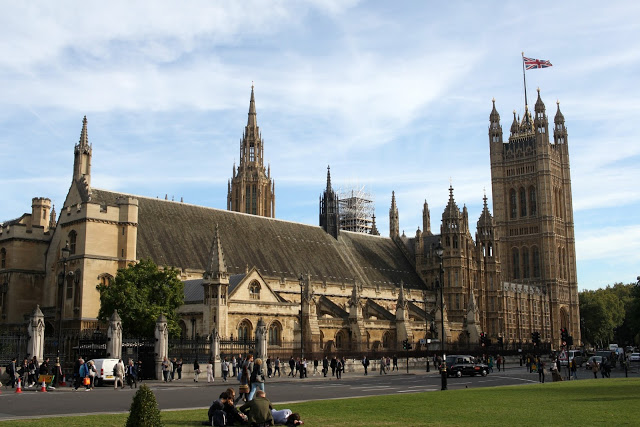 Such an impressive structure!

and, just for fun… 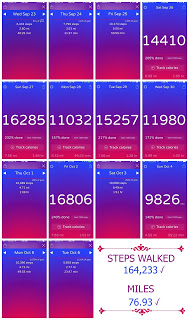 Crazy, huh! Our step counter shows the distance we covered during our trip!
We came home a little lighter and with a bit more stamina than before we left.
🙂
You might also like…
St. Paul’s Cathedral 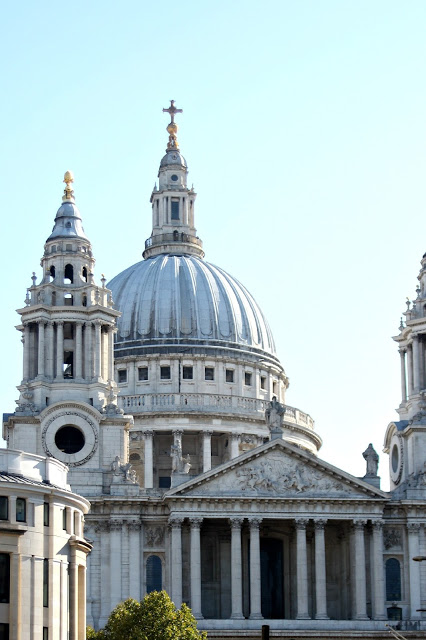 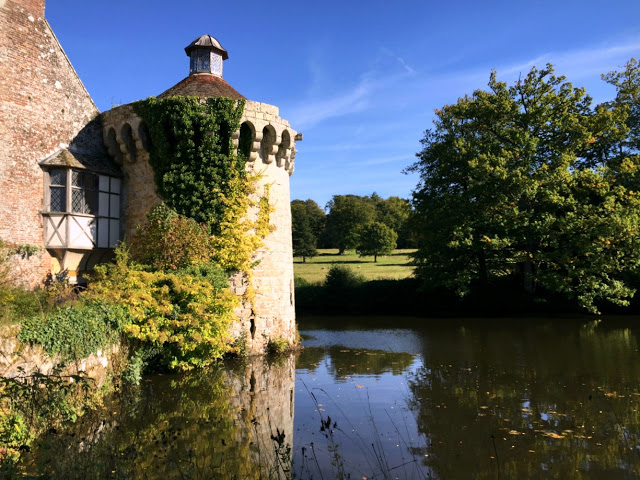