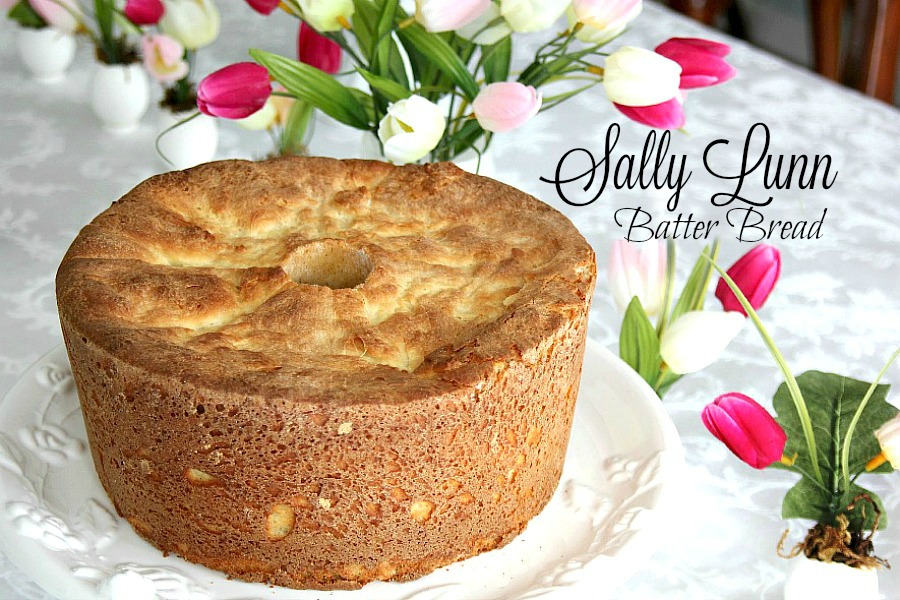 Sally Lunn Batter Bread is a lovely yeast bread, golden in color and baked in a round. Delicious toasted with butter and jam or marmalade. Great with meat and gravy too. Instead of dinner rolls I served this unusual bread last night. Sally Lunn batter bread is unusual in appearance and texture and it comes with a bit of history.  I have made it in the past but was now curious as to the origin.
There are affiliate links in this post.
from: Smithsonian.com
Who was Sally Lunn?
Well, that’s hard to say. She might have been a real woman, a French-born pastry cook named Solange Luyon who fled to England as a refugee in the late 17th-century. A modern-day bakery and museum called Sally Lunn’s still stands on the site in Bath where she is said to have baked and sold a distinctive type of bun:
Legend has it that from her home in France, where the Protestant Huguenots were being cruelly persecuted, came young Sally Lunn to find employment with a baker who rented premises in Lilliput Alley. She sold his wares in the street, but when her skill at baking Brioche was discovered she no doubt spent for more time in the bakery itself. Sally Lunn’s Buns were a tremendous success; others tried hard to copy them, but her skill with the rich, soft and delicate dough inspired customers specifically to request the Sally Lunn.
But other stories abound. A 19th-century British book says the buns in question were invented by a French refugee named Madame de Narbonne, who established a bakery in Chelsea, England sometime around 1800. She specialized in “a particular type of tea cake” which became quite popular in local households, and Sally Lunn was the name of the Scotch maidservant who delivered it.
Or perhaps there was no Sally Lunn, and the baked buns got their name from their appearance, round and contrasting (the bottom side being dark from baking), like the sun and the moon: Soleil et lune, in French, transformed by cockney British accents into something more like “Solly Lun.” 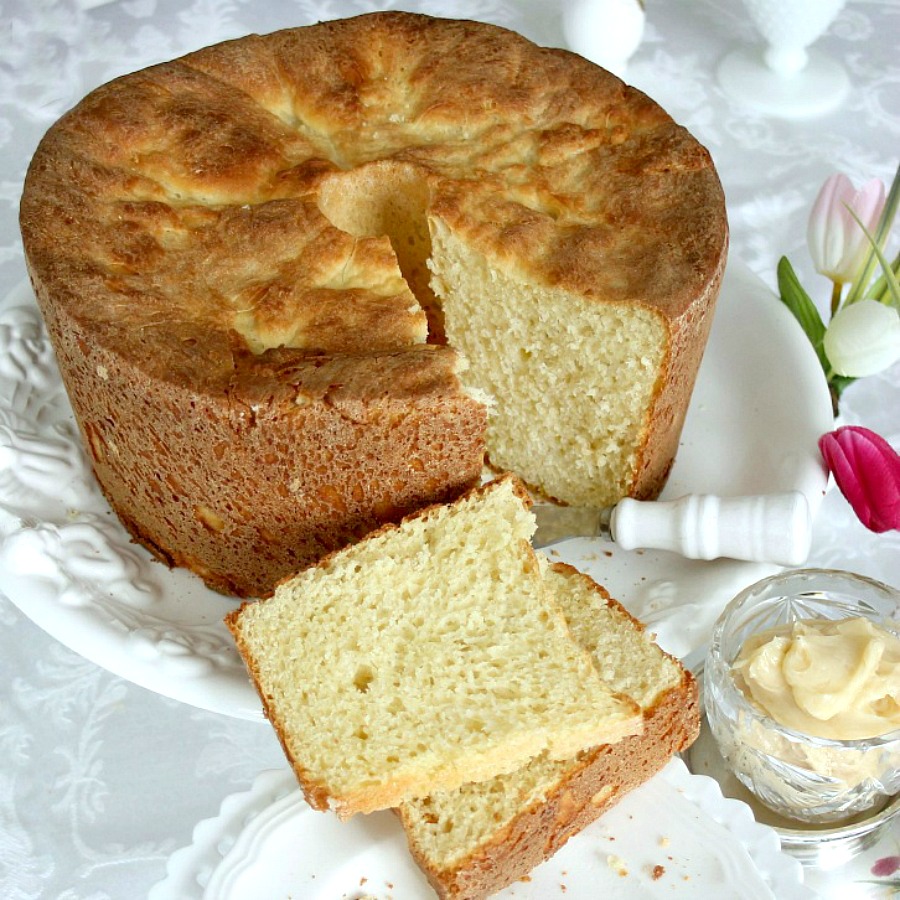 In a large bowl, dissolve yeast in warm water. Add the milk, butter, sugar, salt, eggs and 3 cups flour; beat until smooth. Stir in enough remaining flour to form a soft dough. Do not knead. Place in a greased bowl, turning once to grease the top. Cover and let rise in a warm place until doubled, about 1 hour.

Stir the dough down. Spoon into a greased and floured 10-in. tube pan. Cover and let rise until doubled, about 1 hour.
Bake at 400° for 25-30 minutes or until golden brown. Remove from pan to a wire rack to cool.

NOTE: Since the bread has very little sugar, the honey butter is wonderful spread on a slice. Toasted with butter and jam would be lovely for breakfast or afternoon snack with tea. 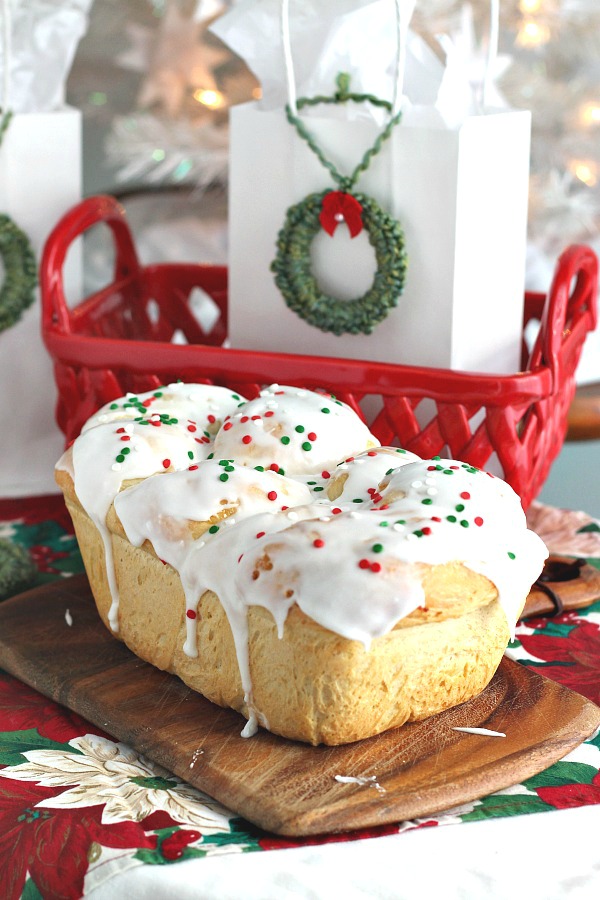 If you enjoyed this post, you’ll love my weekly email. Subscribe to have updates delivered to your inbox and receive FREE gifts available exclusively for subscribers. Don’t miss new content with recipes and ideas to inspire & encourage you. We would love for you to join our community. Just click the subscribe button below. 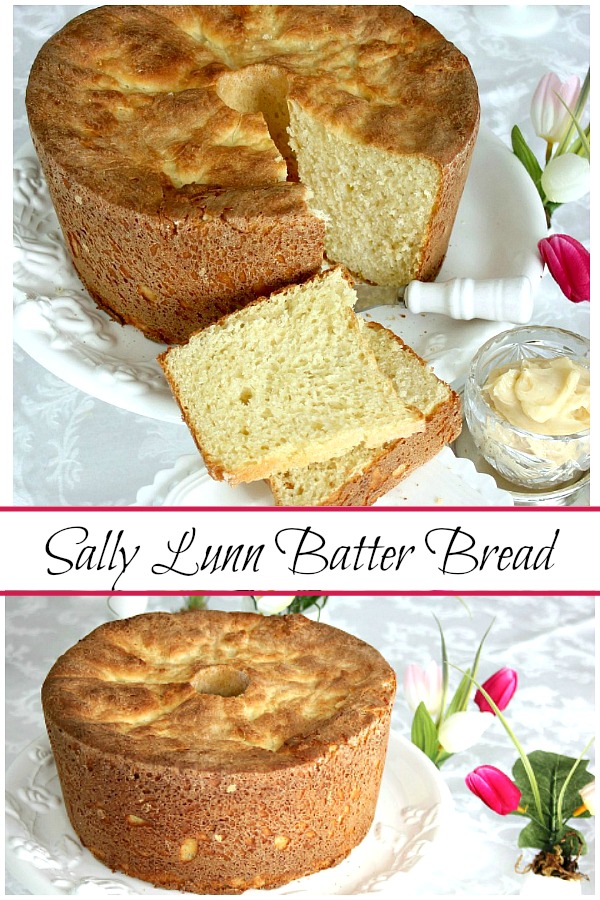