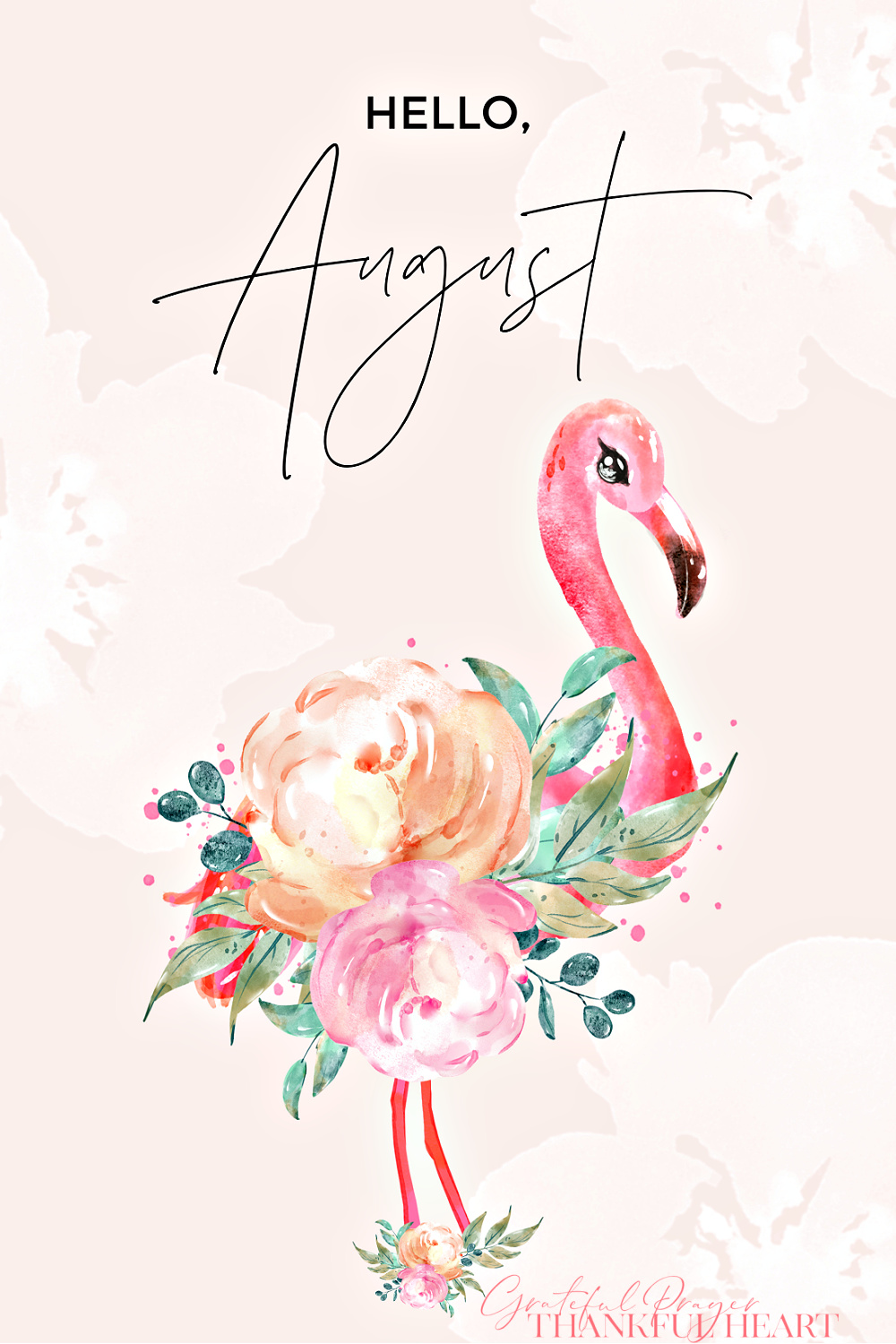 Hello, August! Stay on top of the things that are important to you with this FREE 7-page planner set of printable pages embellished with the sweetest watercolor flamingos and flowers! 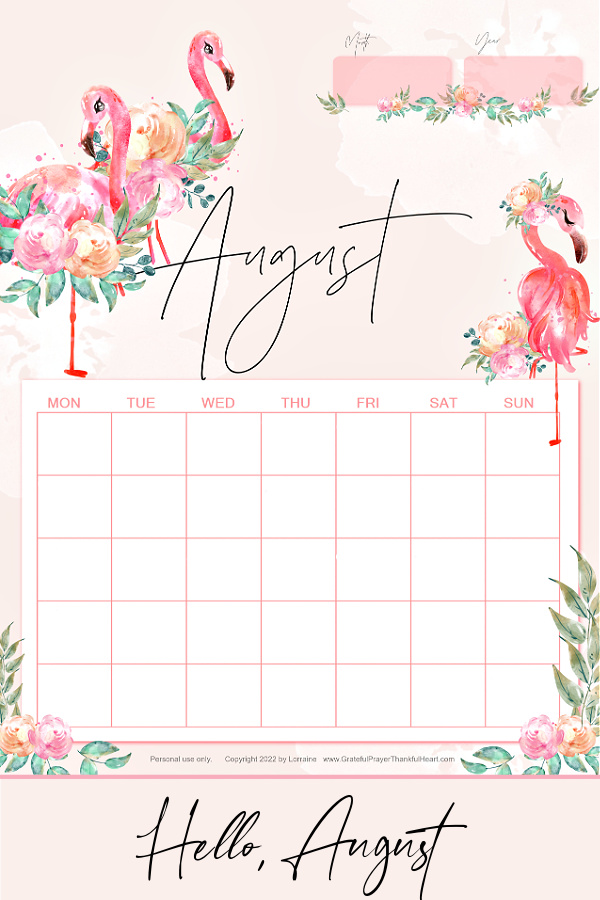 Plan your month using this cheerful flamingo calendar. And while you’re at it, give some thought to some of your personal, health and growth goals. Plan out meals for the month and you’ve accomplished a lot of planning already! 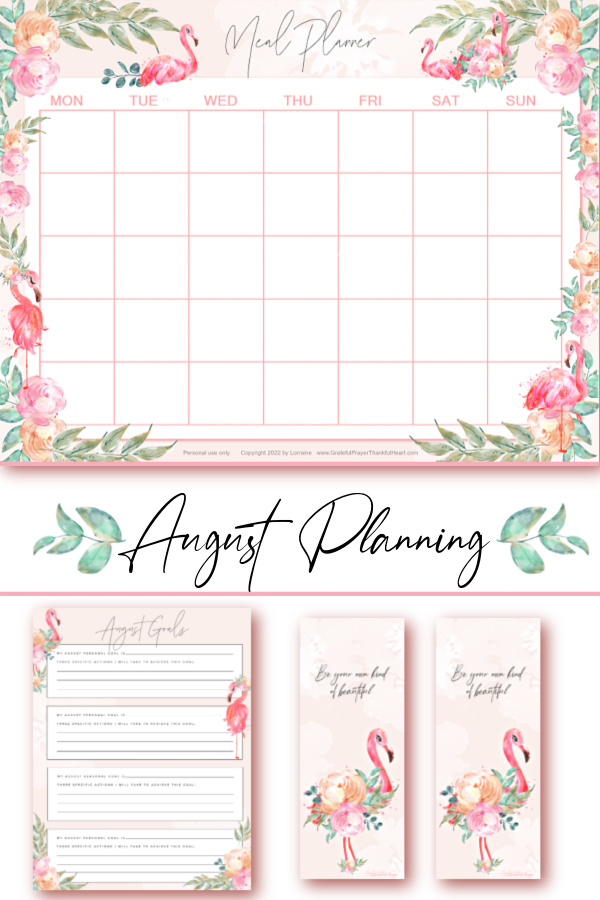 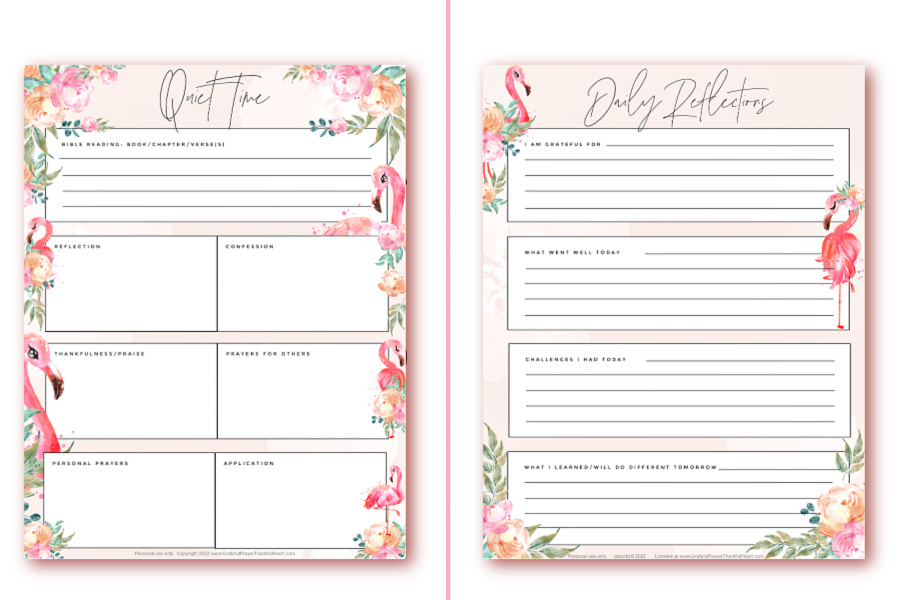 There is something fascinating about the tall, graceful flamingo bird, with it’s beautiful bright pink feathers.

The word “flamingo” derives from the Spanish/Portuguese and Latin word “flamenco,” meaning flame-colored or fire. It refers to those fiery-colored feathers, although not all flamingos have a vibrant appearance.

What is a group of flamingos called?

The term to describe a gathering of flamingos is “flamboyance.” They are also called a stand, colony, or regiment, applying to a flock of more than two birds.

Flamingos prefer larger flocks. A typical flock is several dozen birds, but flocks of up to a million have been recorded. Large flocks are a safety measure against predators, offer stable population growth, and breeding success.

How do Flamingos eat?

The birds flock together by the thousands on salt flats, lagoons, lakes, and swamps around the world, where they can filter-feed for shrimp, algae, and insects.

Flamingos feed by stirring up mud with their feet. Then they reach down and scoop up a beakful of mud and water. Their beaks are designed to strain animals out of the mud, and the muddy water is expelled. This happens as the flamingo’s head is upside-down.

What is a baby flamingo called?

How do baby flamingos grow?

Pair bonding is very strong, and flamingos may be monogamous laying only a single egg each year, typically not laying a replacement egg if something happens to it. Their beaks are straight, and begin to curve as they grow and mature

The male and female of a mating pair build a nest together, and both sit on the egg while it incubates for about a month.

When a flamingo chick hatches, both parents take turns feeding it: first with a special liquid baby food they produce in their throats called crop milk, then with regurgitated regular flamingo food as the chick ages.

The chicks are born gray or white with fluffier plumage to keep them warm. It can take up to three years for a chick to achieve mature pink, orange, or red plumage. Their beaks are straight, and begin to curve as they grow and mature.

How tall are flamingos?

Adult flamingos are four to five feet tall, but only weigh between four and eight pounds.

Yes! Flamingos can fly and tend to fly at very high altitude and can fly for long distances. They can fly as far as 375 miles in one night, hitting an average speed of 35mph and flying as high as 15,000 feet above the ground.

When flamingos fly, they hold their legs and necks out, often with their bills tipped upwards. They may appear clumsy in flight because of their long necks and dangling legs, making them seem wobbly.

Why does a flamingo stand on one leg?

Why are flamingos pink?

The bright pink color of flamingos comes from what they eat. Beta-carotene is a red-orange pigment that’s found in high amounts within the algae, brine fly larvae, and brine shrimp that flamingos eat in their wetland environment.

In the flamingos digestive system, the enzymes break down carotenoids into pigments that are absorbed causing the color in their feathers and skin.

Large amounts of carotenoids must be ingested to actually color the feathers and skin. That’s not a problem because the flamingo diet is nearly exclusively carotenoid-filled foods.

The feathers under their wings (flight feathers) are black. You only see them when the birds are flying.

How long do flamingos live?

Flamingos have a lifespan of 20 to 30 years in the wild. With veterinary care, a regular diet, and fewer predatory threats, flamingos can live up to 50 years in captivity.

There are more plastic flamingos in America than there are real ones. Don Featherstone of Massachusetts invented the pink plastic lawn flamingo, gracing lawns since 1957. The “official” pink flamingo is from Union Products. 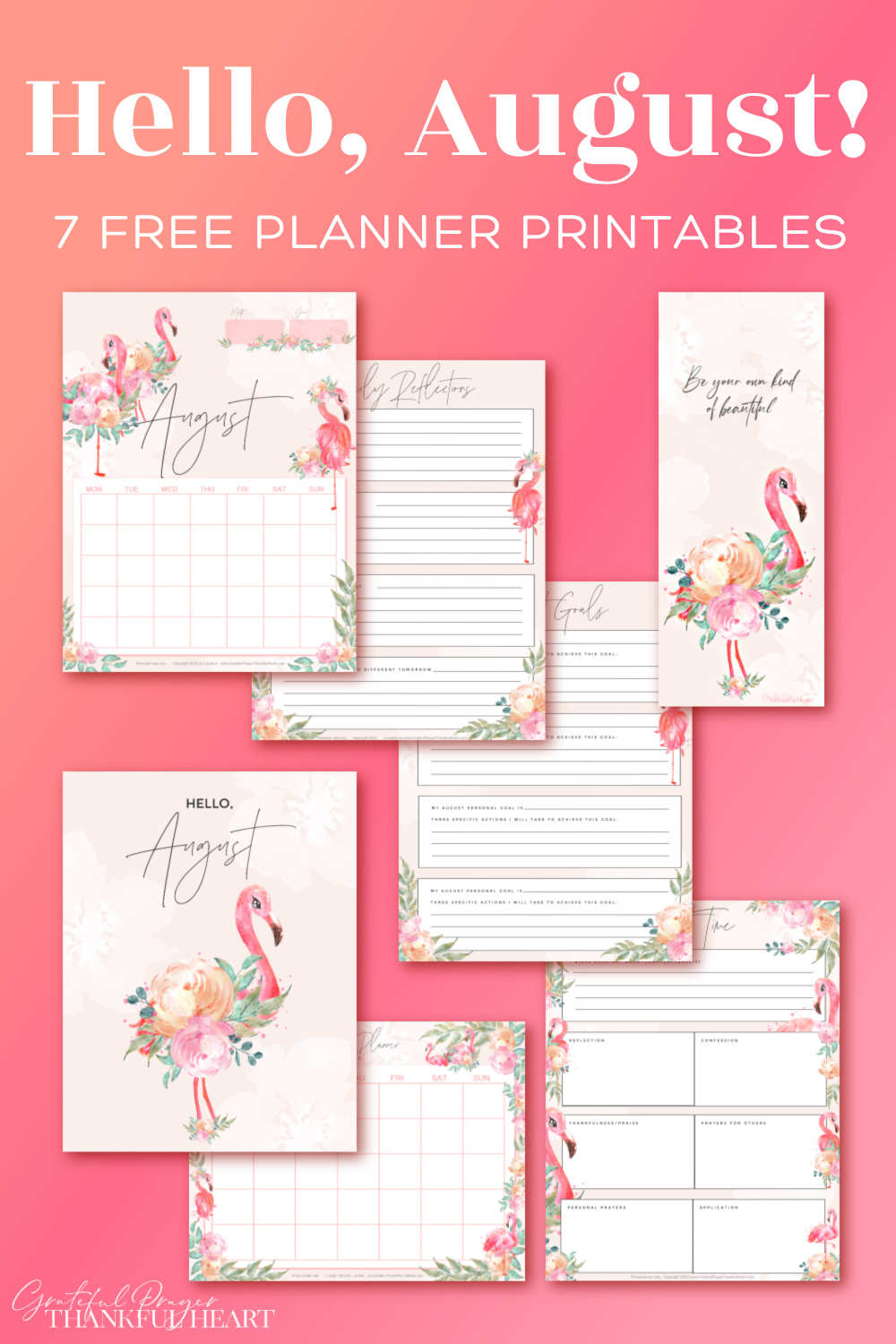 Get our GPTH Newsletter and get instant access to the Free Printables PDF. You will receive a link to the PDF via email within 24 hours. Be sure to check your spam and promotions folders if you do not see the email in your inbox. 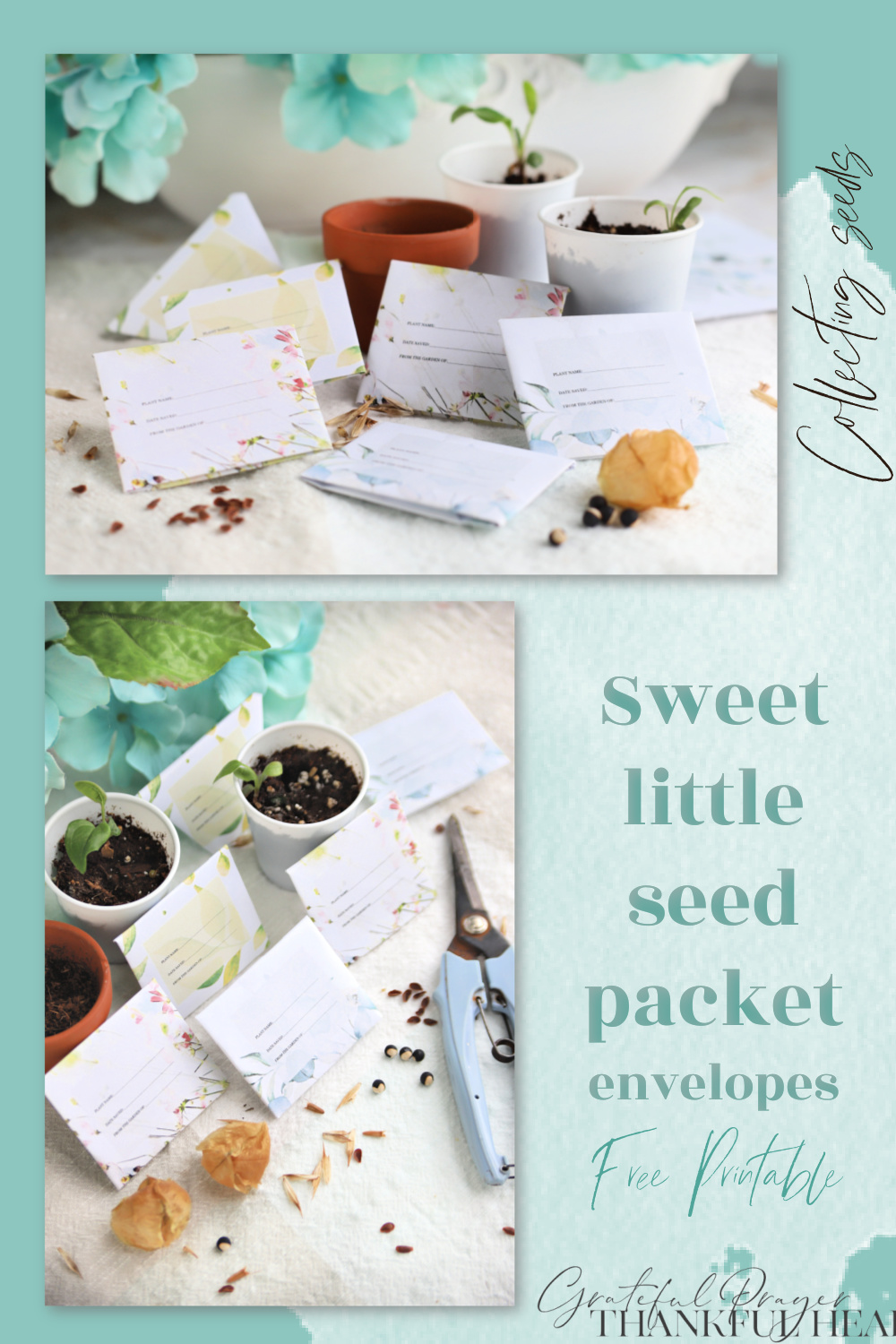