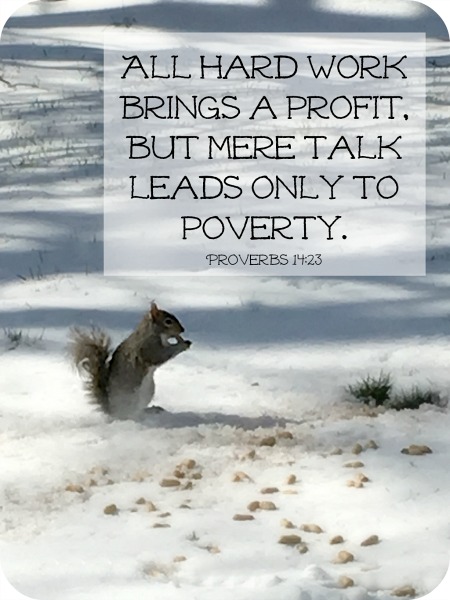 We had a blast of wintry weather this past week even though spring begins tomorrow. From my kitchen window I caught a glimpse of a little gray squirrel sniffing about the snow under the bird feeder.
Usually squirrels are annoying and unstoppable when it comes to emptying the bird feeder. This chilly day only some scattered seed on the ground was left.
I keep a large glass container of peanuts on my counter and last night, thought to toss a handful out the door wondering if the birds might be interested. This morning there was not a peanut remaining.
Thinking it wasn’t the birds since they are not active at night, I was now curious. We have a menagerie of critters in our backyard including a groundhog, chipmunks and stray cats. Any might had found and eaten them.
Looking from my kitchen window and seeing a squirrel, I went to the door to throw out more peanuts. He darted away when he saw me but soon returned to investigate. 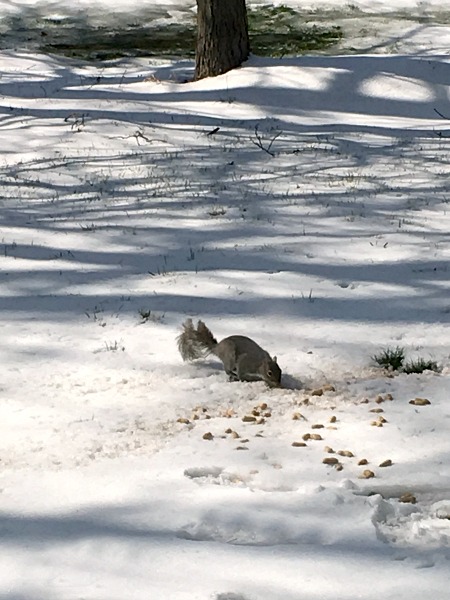 For the next forty-five minutes I watched as he scampered back and forth, back and forth, scooping up each peanut in his tiny paws then turning abruptly as he ran off. He ran just a short distance each time and in a different direction yet with determination and purpose. 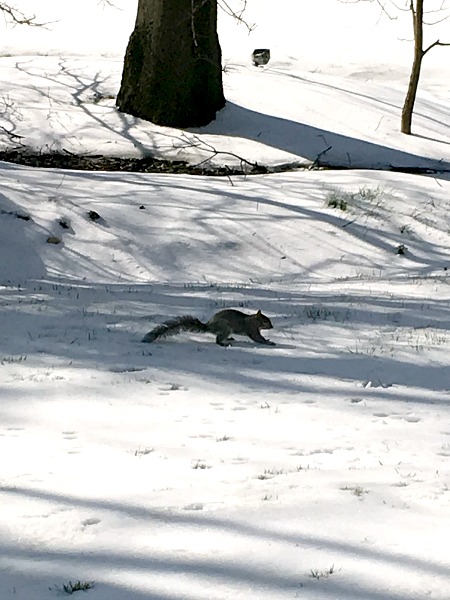 After quickly digging and burying each peanut, using those little paws, he firmly patted the ground making sure his treasure was safe. 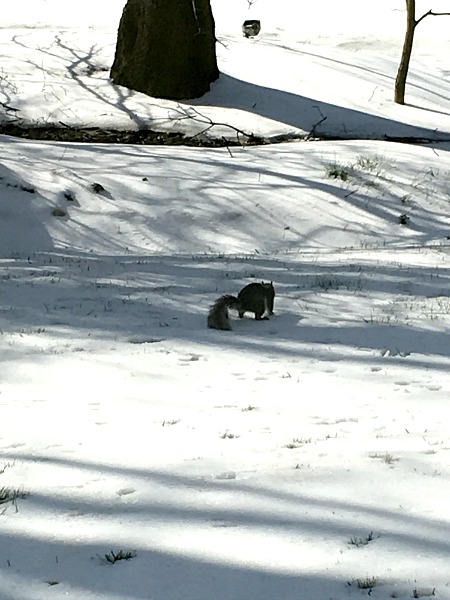 He stopped only occasionally to actually eat a peanut, seeming only to refresh himself from the tedious work.
He wasted no time deciding where to bury the peanuts, sometimes even in a neighbors yard. When he thought all the territory was covered he hopped onto a crock to hide his last peanut. 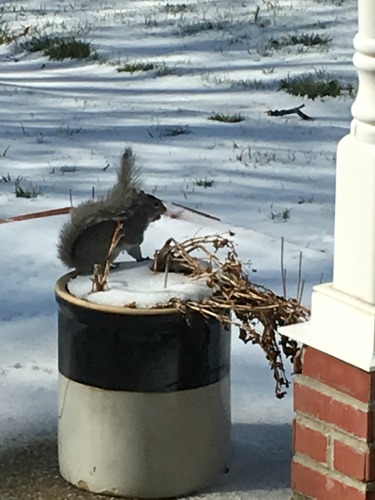 Watching the antics of this industrious squirrel I could’t help but think of the bible verses that speak on hard work. A backyard squirrel behaving in a similar manner as the ants we read about in the bible. We are instructed to look at the ants and consider their ways. (Proverbs 6:6) To set aside laziness and be self-motivated. To look ahead as the ants “provides her supplies in the summer, and gathers her food in the harvest” (Prov 6:7-8)
We are warned of where laziness will lead, as Solomon teaches of the sluggard. “And poverty will come on you like a thief and scarcity like an armed man.” (Prov 6:11).
I spent too much time at the window being entertained by this spunky, diligent squirrel hurrying about in the warmth of the sun. I smiled watching him nibble a nut and pat the snow and swish his tail. But mostly I watched because I admired its demonstration and hard work.
All hard work brings a profit,
but mere talk leads only to poverty.
Proverbs 14:23