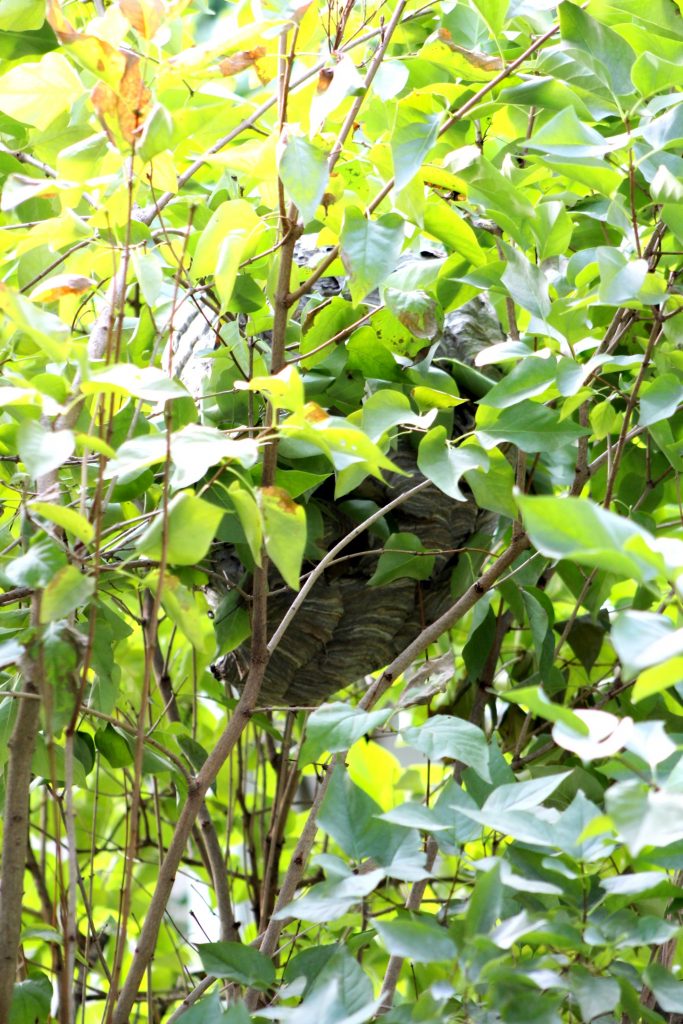 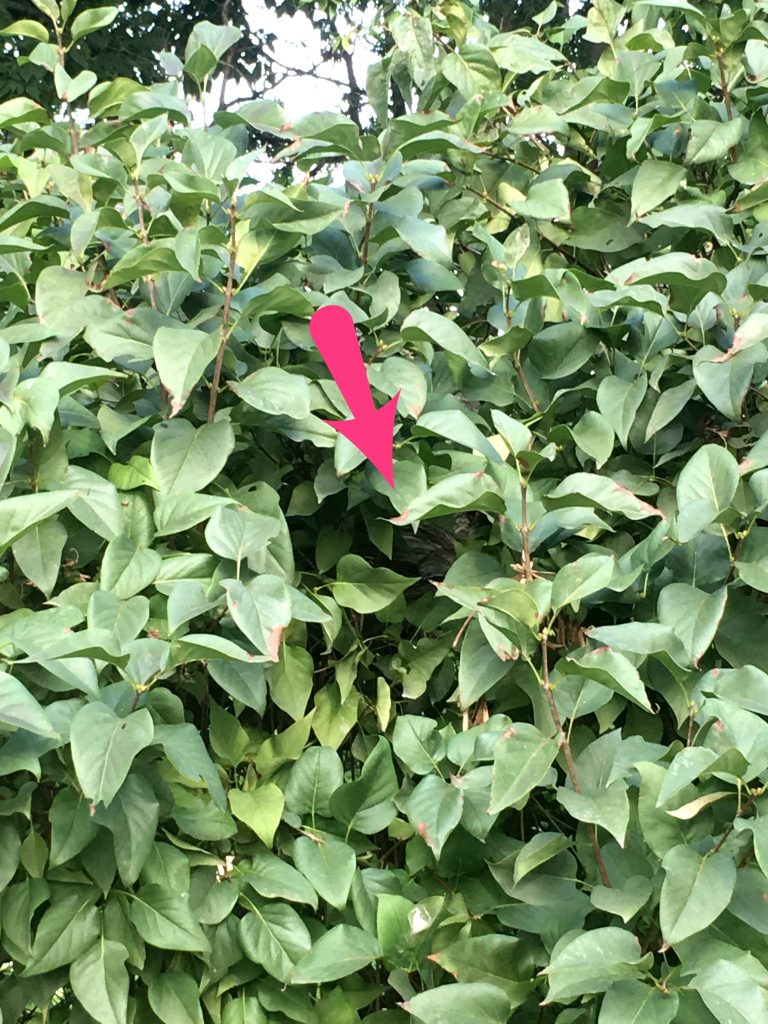 Early in the morning before the light of day, John heard thumping on the window in the kitchen. When he drew back the curtain he saw hornets hitting the glass. He recognized them as white or baldfaced hornets. After a few days of this I decided to investigate.

At the corner of the house, near the kitchen window, we have a large lilac bush. I looked around the house and through the branches of the bush and thought, “nothing there.” Then something caught my eye. Right there, obscured by the leaves, I spotted a large hive. Yikes!

I did a little research and talked to some people and learned that these bees are not actually a “true” member of the Hornet Family, but are in the family of yellowjacket wasps. We were reluctant to destroy the nest because bees are so important in pollination. After much consideration and concern for our grandson’s aversion to bees after the attack he and our dog experienced when he was younger, we called an exterminator. We also were planning a dinner party on the patio that coming weekend. John was adamant that this was one chore he was not keen on tackling himself.

The bald-faced hornet gets its name from the characteristic white markings on its face. They are distinguished from other yellowjackets by their white and black coloring. It has a white or “bald-faced” head. These wasps also have three white stripes at the end of their bodies and are notably larger than other species.

Bald-faced hornets are omnivorous, and are beneficial due to their predation of flies, caterpillars, and spiders. However, their aggressively defensive nature makes them a threat to humans who wander too close to a nest or when a nest is constructed too close to human habitation. They vigorously defend the nest, with workers stinging repeatedly, as is common among social bees and wasps. However, the bald-faced hornet has a unique defense in that it can squirt venom from the stinger into the eyes of vertebrate nest intruders. The venom causes immediate watering of the eyes and temporary blindness

About the hornet nest

Hornet nests are usually located in bushes and shrubbery, at least 3 feet off the ground, and in trees as high as 60 feet or more. They are sometimes found under the eaves of buildings and other protected locations. The nests are a grey color and can reach up to 24 inches in height and 18 inches across.

The workers and assume the chore of expanding the nest. They chew up wood, which mixes with a starch in their saliva. They then spread it around with their mandibles and legs, and it dries into a papery structure. Hornets build a large hanging paper nest up to 23 in in length and colonies contain 400 to 700 workers. 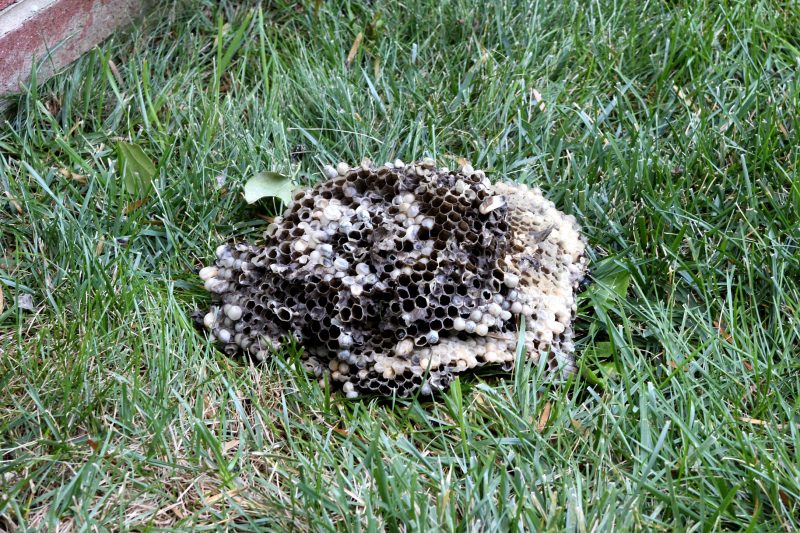 If the nest we found wasn’t located so close to our home and living area, we would have left it alone. But we felt its location provided a risk to ourselves and to others and that is why we decided to have it removed.

If you are brave and don’t have allergies or health concerns with bees, it is possible to tackle the job killing the colony yourself. We DID NOT want to attempt his ourselves so called in an exterminator. 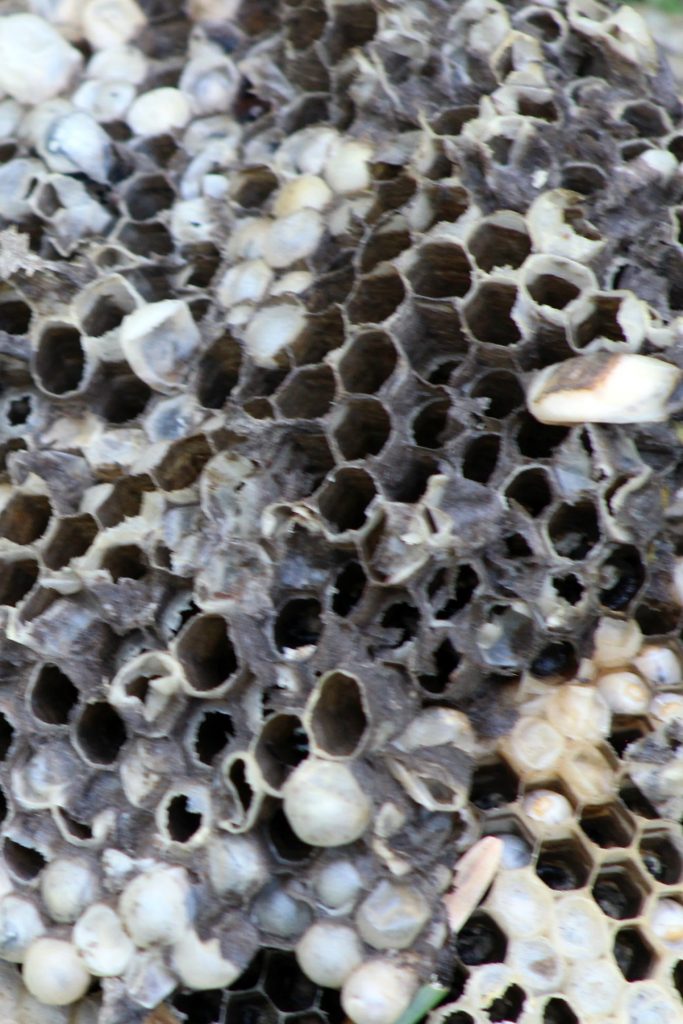 If you decide to do this yourself, proceed with caution. Always read the insecticide label and follow those recommendations. Wear long sleeved clothing, long rubber gloves and goggles to protect yourself from any insecticide that falls out of the nest or splashes off the surface. Launder clothes and take a shower immediately after application if any insecticide falls on you.

During daylight, scout out the nest to determine the best approach that will not disturb the wasps prior to introduction of the insecticide. Using a ‘wasp and hornet’ product, spray into the nest opening during the nighttime.

Have you had an encounter with bees? Tell us about it. Leave a comment or email me. We’d love to hear about it.

Stay safe my friends and keep in touch!