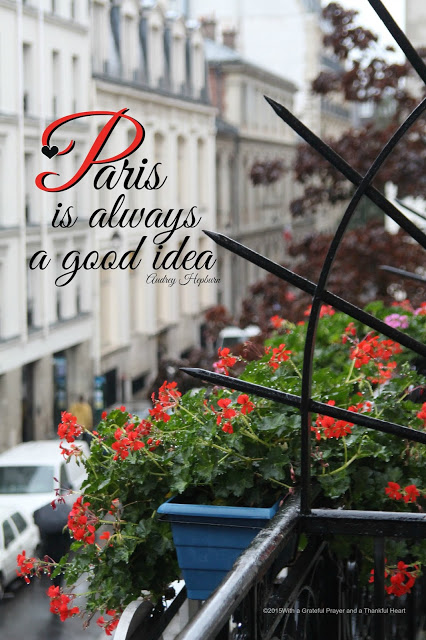 Paris is always a good idea and autumn in Paris is a lovely time of year. This is the beautiful view we had from our hotel balcony. 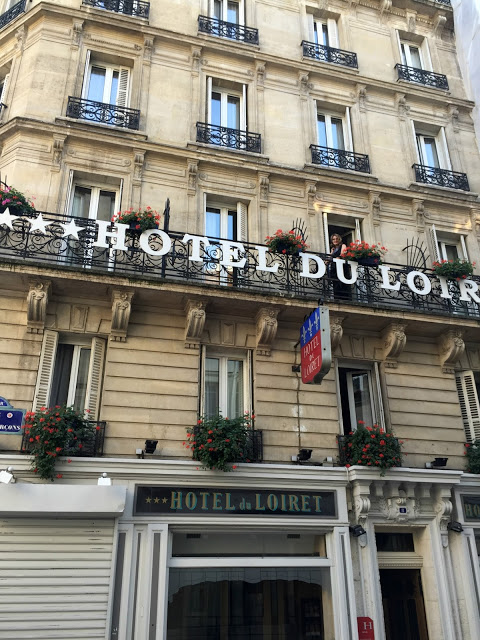 And this is the view from the street looking up as I stood on the balcony. 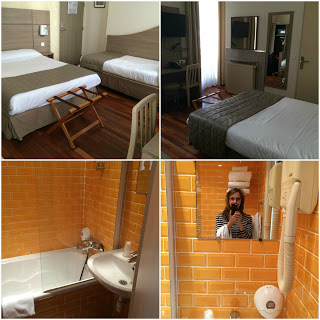 We didn’t know what to expect when we booked our room and we were more than pleased to find it spacious with attractive and contemporary styling.

With the loveliest balcony.

A visit to the Louvre

Next, we were off on our much anticipated visit to the Louvre. 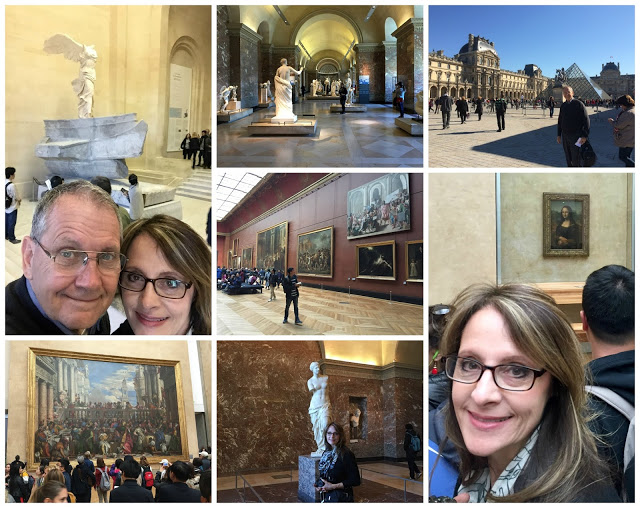 The Louvre awed us as we knew it would, with its huge collection of masterpieces.

The Venus de Milo was added to the Louvre’s collection during the reign of Louis XVIII.
The Nike of Samothrace (winged Victory), marble, circa 190 BC.
The Mona Lisa, (Leonardo da Vinci), oil on panel, 1503–19, probably completed while the artist was at the court of Francis I.
The Louvre Museum is one of the world’s largest museums and a historic monument in Paris, France. A central landmark of the city, it is located on the Right Bank of the Seine in the 1st arrondissement (ward). Nearly 35,000 objects from prehistory to the 21st century are exhibited over an area of 652,300 square feet. The Louvre is the world’s most visited museum, receiving more than 9.7 million visitors in 2012.

The museum is housed in the Louvre Palace, originally built as a fortress in the late 12th century under Philip II. Remnants of the fortress are visible in the basement of the museum. The building was extended many times to form the present Louvre Palace. In 1682, Louis XIV chose the Palace of Versailles for his household, leaving the Louvre primarily as a place to display the royal collection, including, from 1692, a collection of ancient Greek and Roman sculpture. During the French Revolution, the National Assembly decreed that the Louvre should be used as a museum to display the nation’s masterpieces. source 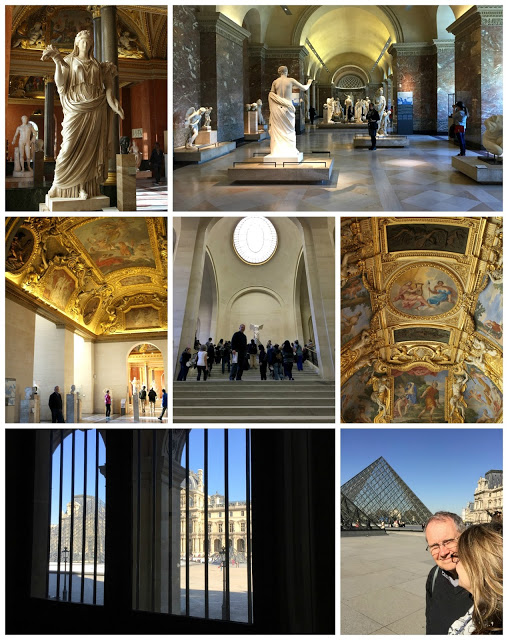 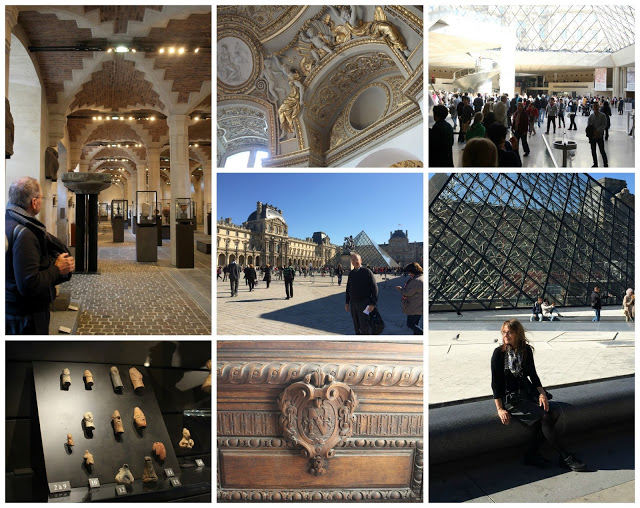 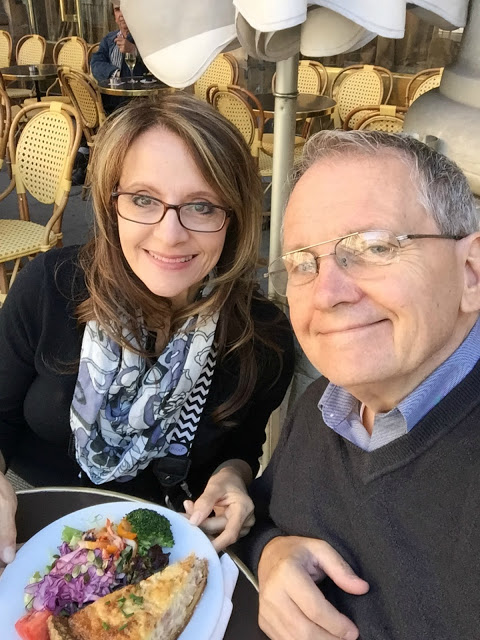 Next, a delicious lunch at… 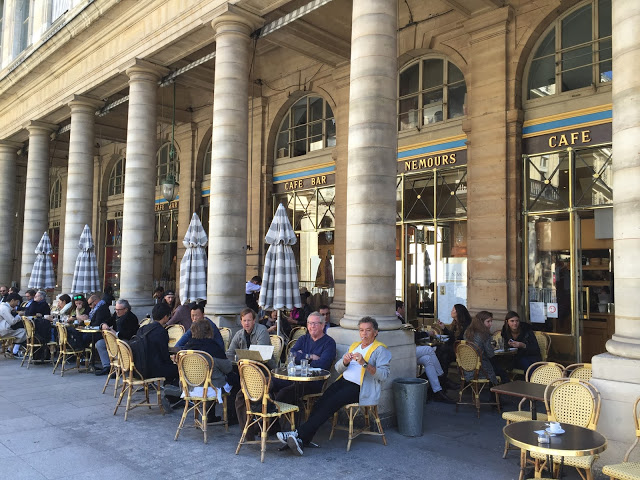 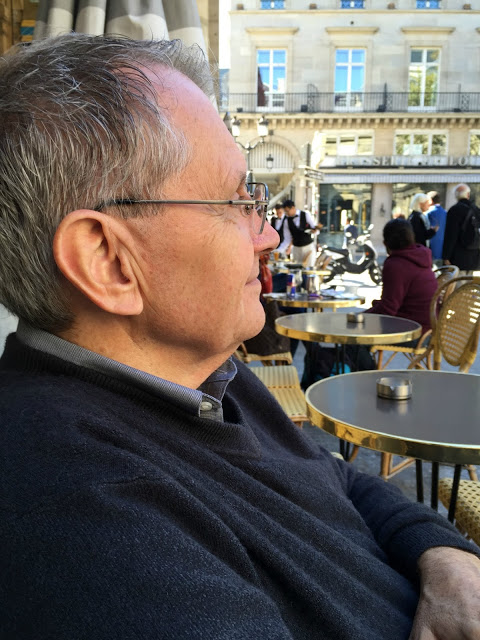 Back to the Metro and on to the Arc de Triomphe de l’Étoile. 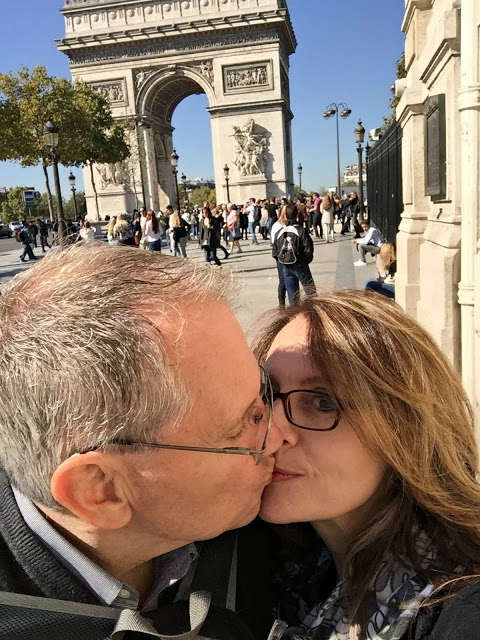 When we surfaced from the underground Metro, we were awed once again by this gorgeous monument. And, what did we do?  We took a selfie, kissing, because well, we were in Paris, of course 😉

The Arc de Triomphe is located on top of a hill marking the start of the famous Champs-Elysées Avenue, and is the symbol of Napoleon’s battle victories for France. It stands in the center of the Place Charles de Gaulle, at the western end of the Champs-Élysées 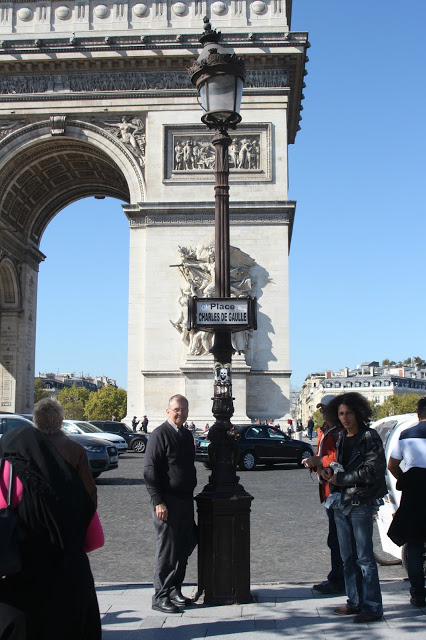 In the center of a busy roundabout with heavy traffic, pedestrians use underpasses that go under the street.This is one of a few places we encountered what may have been a tourist scam (the found gold ring, the clip board and do you speak English question). Since we read about these scams in travel books, we were not taken and no harm done. 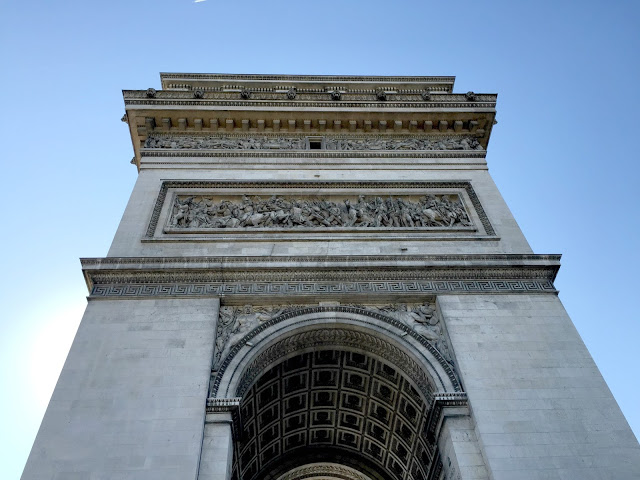 The Arc de Triomphe honours those who fought and died for France in the French Revolutionary and the Napoleonic Wars. 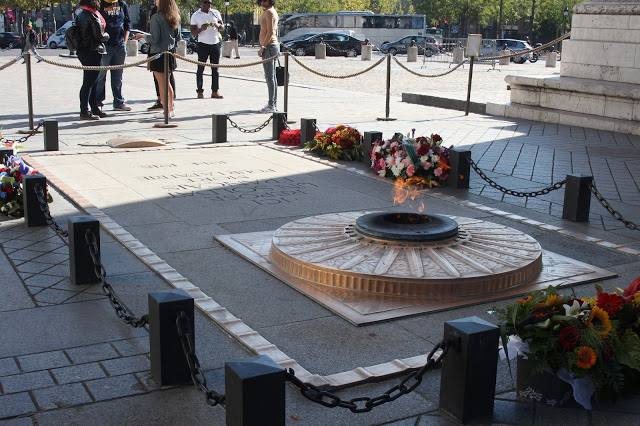 This is the Tomb of the Unknown Soldier of WW1, in memory of the soldiers killed in action. The eternal flame on top has been continuously burning since November 1923. The flame is tended to every day at 6:30pm. 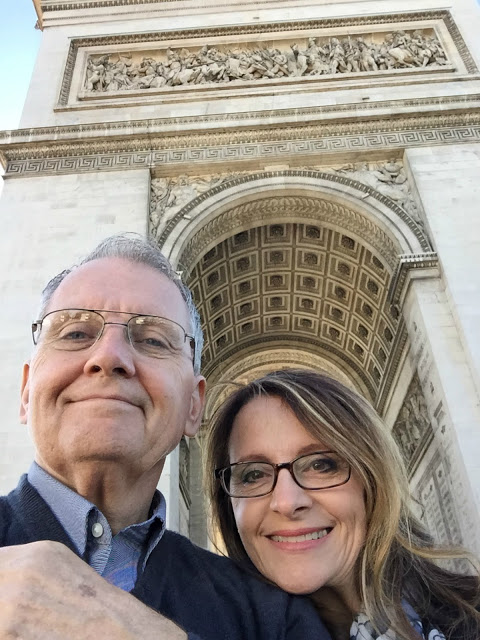 Relief sculptures at the base of each of the four pillars show four victories and war scenes, the top of the Arch has the names of major successes during the Revolutionary and Napoleonic periods. Less important victories are found on the inside walls, plus the names of 558 generals. The underlined names are to show that the general died in battle. 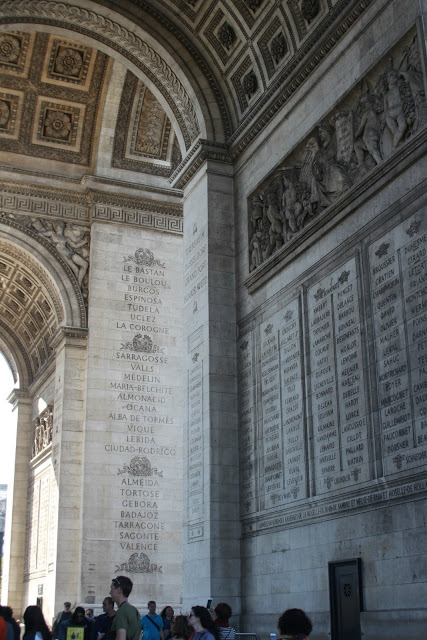 The names of all French victories and generals are inscribed on its inner and outer surfaces. We trekked up the monument, over 280 steps to the top.

There is a museum, shop and sitting area before reaching terrace at the top. 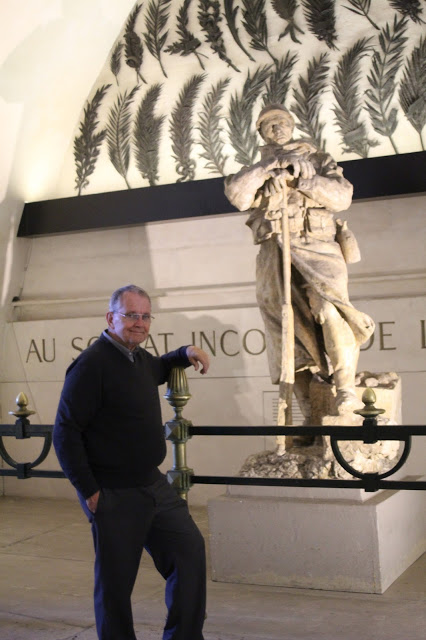 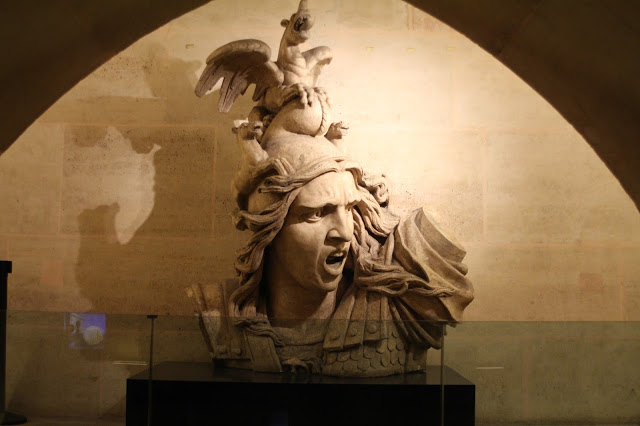 Statue inside the Arc

One of my most exciting experiences in Paris was stepping from the steps onto the upper terrace ~ It was breathtaking!

From here we were able to see the 12 boulevards that radiate out from the circle, like spokes on a giant wheel, or the rays of a star (etoile in French).

This panorama photo John took with his phone, shows the Eiffel Tower off on the right side. 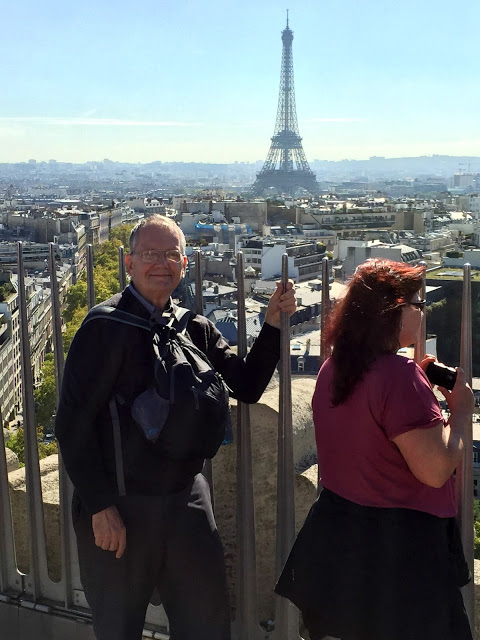 Here it is, a little bigger. 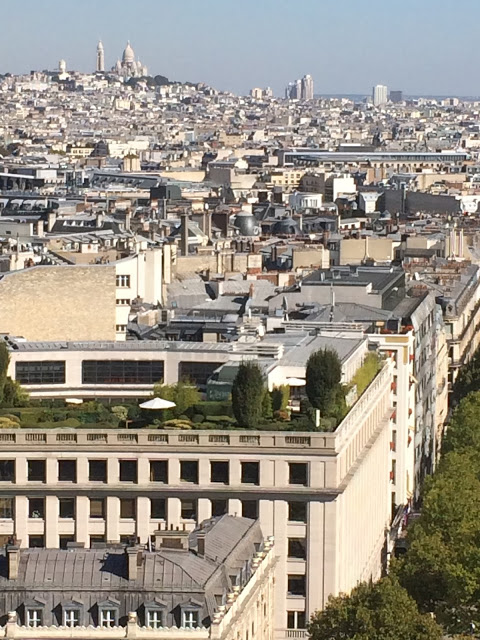 In the distance, to the northeast, you can see the Basilica of the Sacred Heart, more commonly called  Sacré-Cœur. 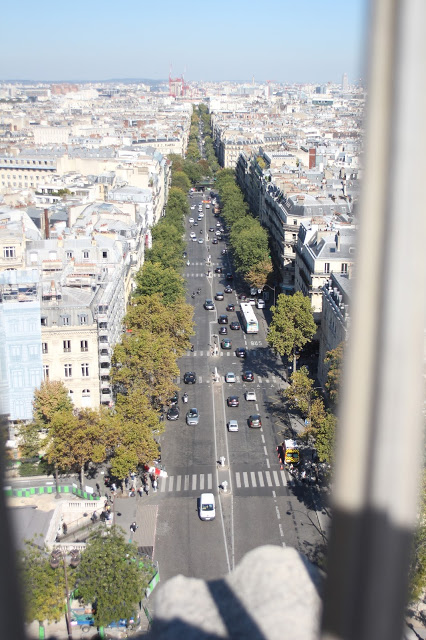 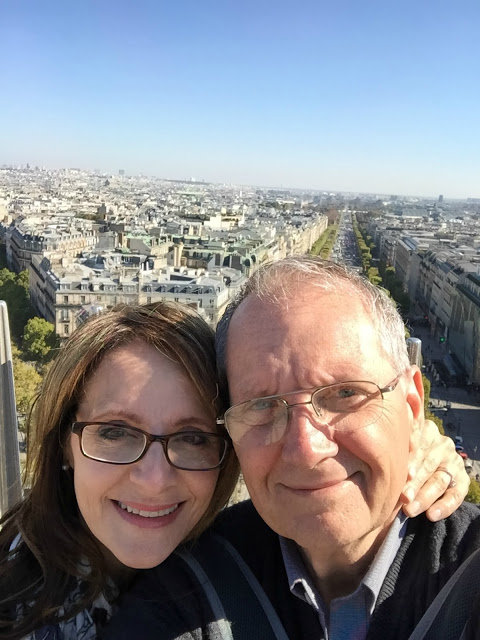 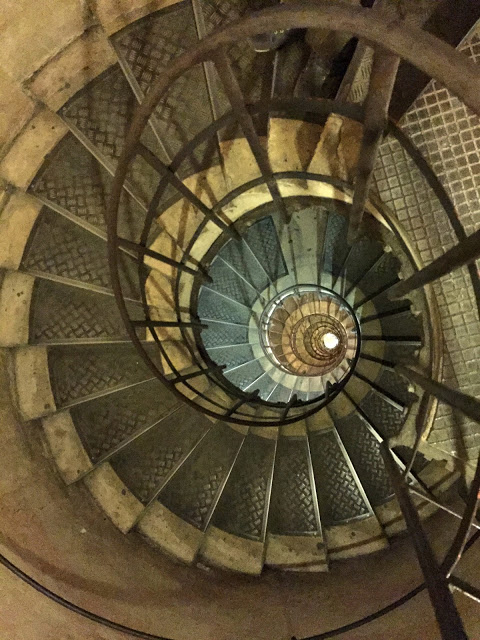 Then the walk back down the spiral steps. 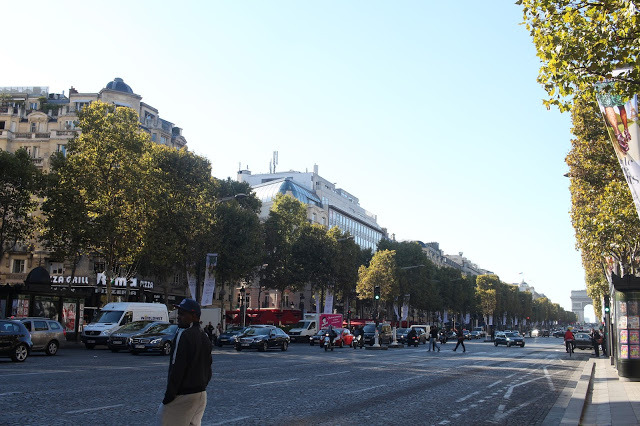 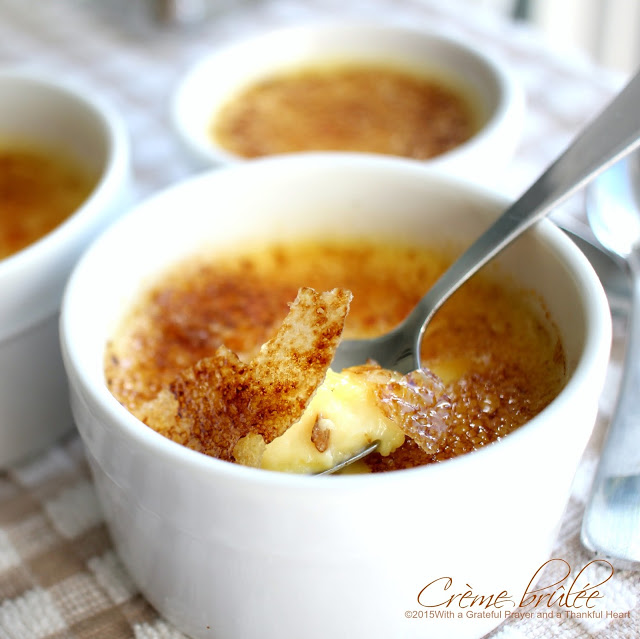 If you like this post and don’t want to miss new content with recipes and ideas to inspire you, join our community and receive updates by clicking the subscribe button below. We’d love to have you be a part 🙂