I mentioned several posts ago that we have had an incredible number of hummingbirds this year and I have been snapping away trying to get shots of these very fast, very tiny birds. 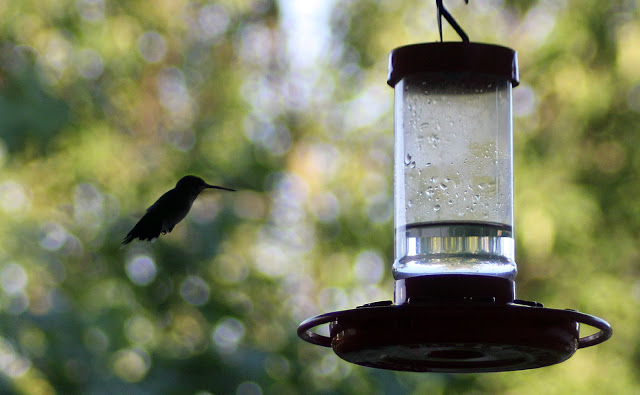 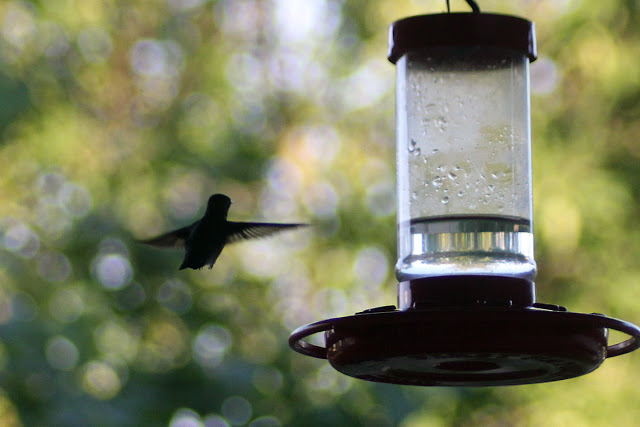 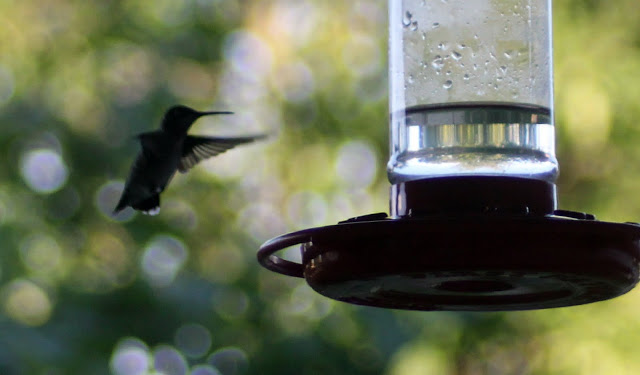 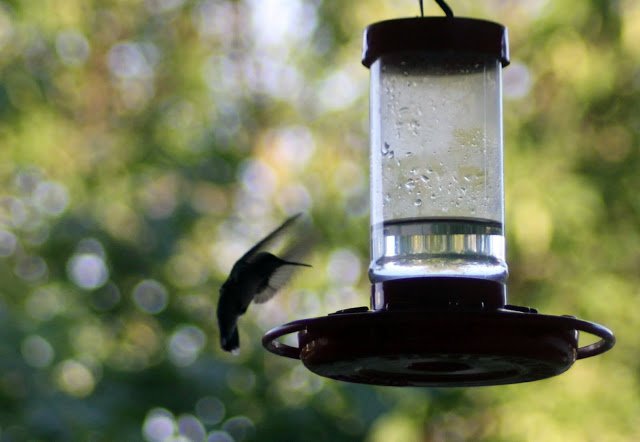 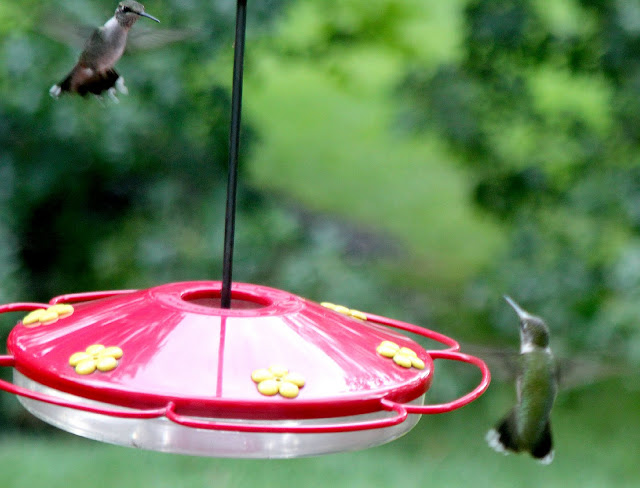 Like all hummingbirds, ruby-throats are precision flyers with the ability to fly full out and stop in an instant, hang motionless in midair, and adjust their position up, down, sideways, and backwards with minute control. They dart between nectar sources with fast, straight flights or sit on a small twig keeping a lookout, bill waving back and forth as the bird looks around. Male Ruby-throated Hummingbirds aggressively defend flowers and feeders, leading to spectacular chases and dogfights, and occasional jabs with the beak.
~*~
We have three feeders ~ each positioned to be easily seen from inside the house.
One is on the front porch, one right outside the side door and one just outside the kitchen window.
I keep the feeders filled with sugar water that I make by bringing
1 cup of sugar and 4 cups of water
just to a boil so that the sugar is completely dissolved.
When cooled I bring in the feeders, empty and wash them, and refill with the fresh nectar. 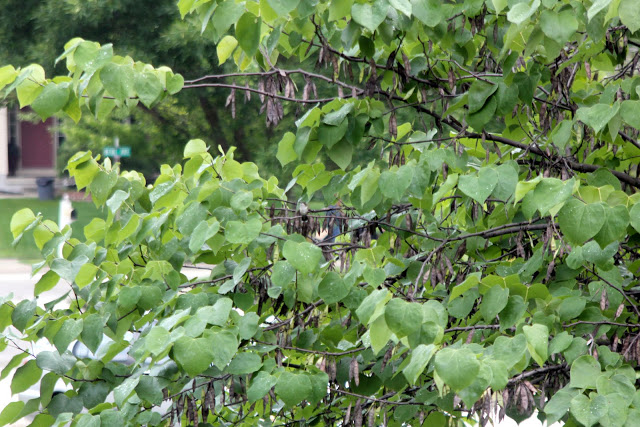 The hummers wait for their feeders to be returned so they can again get their fill.
Can you see the hummingbird in this photo? 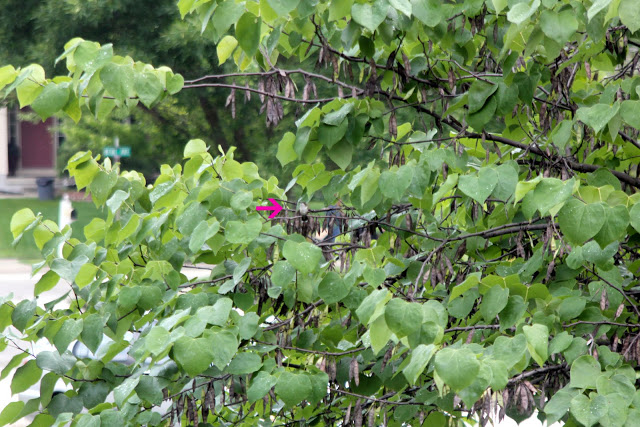 it is hard to see her… 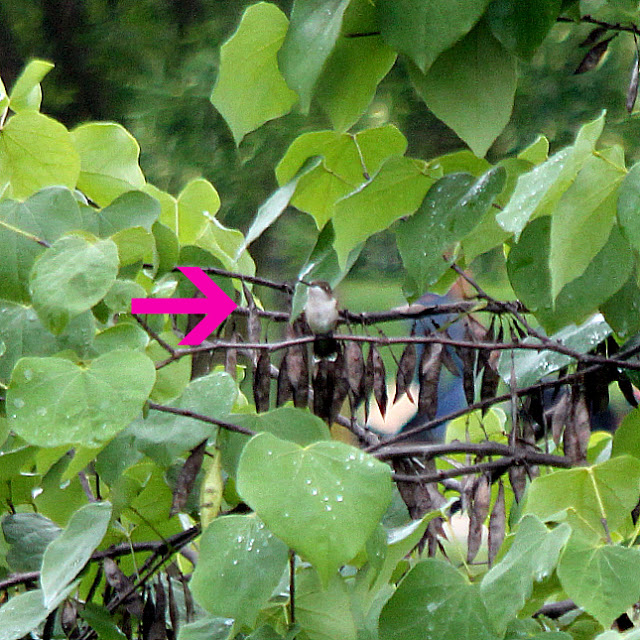 There she is. The female Ruby-Throated hummer does not have the iridescent red band around the neck as does the male. 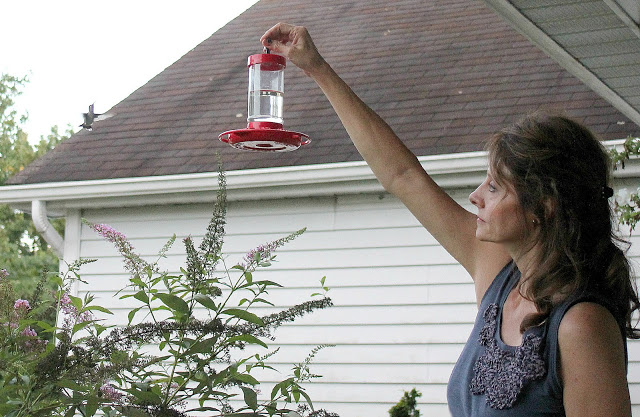 Happy to have the feeder returned, this little bird can barely wait for me to hang it on the hook. See her flying in from the left of the photo, right at the roof edge? 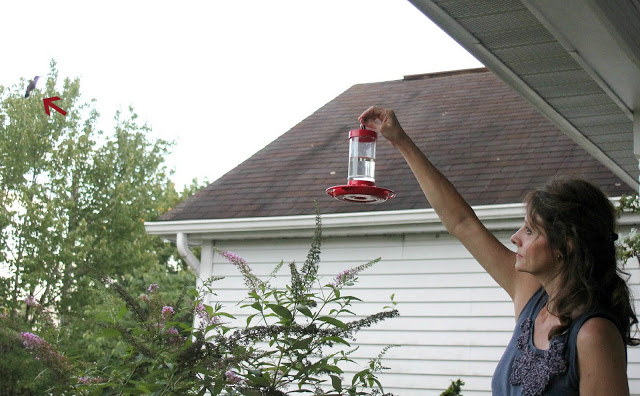 She didn’t land on the feeder while I was holding it but she came very close. 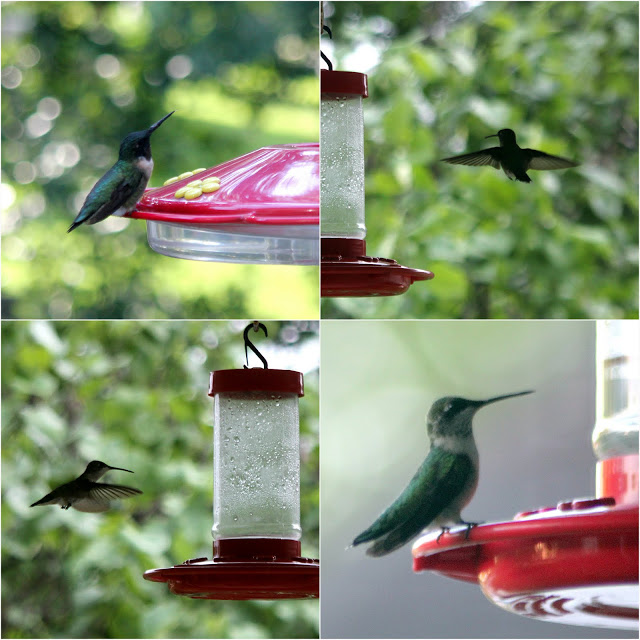 Medium to long-distance migrant. Most Ruby-throated Hummingbirds spend the winter in Central America, and most get there by flying across the Gulf of Mexico. Some birds stay in North America along the Gulf Coast and at the tip of Florida; these are usually birds from farther north rather than birds that spent the summer there. 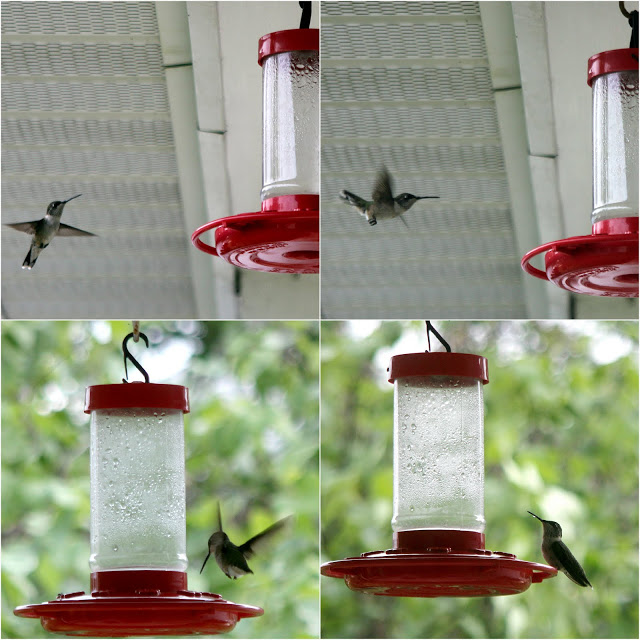 From Wikipedia:
Ruby-throated hummingbirds are solitary. Adults of this species typically only come into contact for the purpose of mating, and both males and females of any age aggressively defend feeding locations within their territory. The aggressiveness becomes most pronounced in late summer to early fall as they fatten up for migration. This is important because, as part of their migration, they must fly across the Gulf of Mexico – a feat which long confounded scientists, as a 500-mile, non-stop flight over water would seemingly require a caloric energy that far exceeds an adult hummingbird’s body weight of 3 grams. However, researchers discovered the tiny birds can nearly double their body mass in preparation for their Gulf crossing. The additional mass, stored as fat, provides enough energy for the birds to achieve this amazing flight.